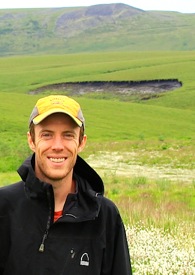 The University of Alberta is currently home to PhD Candidate, Scott Zolkos. As he studies the effects of thawing permafrost on carbon cycling in freshwaters, he is a great fit for his additional role as an International Arctic Science Committee Fellow in the Terrestrial Working Group. His interest in, and appreciation for, international collaborative polar research inspired him to join APECS in 2012, which has ignited his passion for education and outreach. From 2014-2017 Scott served on the APECS Council, taking up the position of Council Chair in 2015. Currently, he serves as the Ex-Officio has he has since 2017.

Serving as Council Chair was very rewarding for Scott. When asked about filling the role he said,

“This perspective gave me great appreciation for the effort APECS leadership contributes to run the organization, as well as the amazing diversity of projects run by Council members.”

Having found a need for connection between researchers from different northern research stations, Scott created and implemented Arctic Snapshots. This program allows networking, exchange of ideas, and informative summer online conferences during which researchers share their findings. Finding ways to connect researchers is exciting for Scott, as this is one thing he really enjoys about APECS,

“I’ve always been excited about the opportunities APECS creates by facilitating education and outreach and by connecting young researchers from diverse backgrounds and scientific disciplines. This is very valuable and exciting because it enables young scientists to step outside the “box” of their research and gain a broader perspective of polar research as a whole.”

Finally, Scott appreciates the role APECS has played in his career as much as we appreciate his work,

“APECS has been instrumental in growing my scientific knowledge and network, in part by enabling me to participate in and create education and outreach activities. Without APECS, my scientific career would not be as rewarding as it is today!”