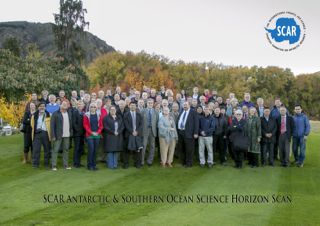 Since the retreat was on invitation only, it was a great honour for the four of us to attend this event where several world's leading Antarctic scientists and policy-makers gathered. Fifty-five scientists from 24 countries convened for this Antarctic and Southern Ocean Horizon Scan initiative, with as aim to identify the most important scientific questions that should be addressed by Antarctic research over the next two decades. From over 800 questions, 80 questions were retained and developed during the three days of the retreat. All attendees actively participated in voting sessions and discussions. The four early career scientists present were: Charlotte Havermans (BE) working on Antarctic benthos and molecular methods and associated with APECS-Belgium, Erli S. Costa (BR) working on seabird ecology, council member of APECS and APECS-Brazil president, Polina Morozova (RU), PhD student in climate modelling and meteorology and Xichen Li (USA), student in atmosphere-ocean-sea-ice modelling. It is important to mention also the participation of Jenny Baeseman (NO), the founding Director of APECS and José Carlos Caetano Xavier (PT, UK), leader of APECS-Portugal, showing the importance of APECS in the training of leaders in polar science.