Not all non-academic career researchers started out as such, and their paths are as diverse as the exciting work that they do. The researcher profiles featured here consist of a series of short bios and interview responses that help to illustrate the myriad ways in which one can become involved in a non-academic career path, as well as what those careers might entail. 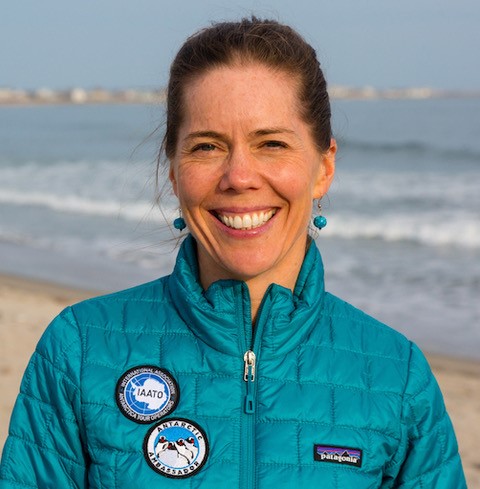 Amanda Lynnes is currently Head of Communications and Environment at the International Association of Antarctica Tour Operators (IAATO). Her role is to help guide and implement IAATO’s mission and objectives to deliver safe, environmentally responsible Antarctic travel, representing the association at international fora including the Antarctic Treaty Consultative Meeting, Committee for Environmental Protection and Commission for the Conservation of Antarctic Marine Living Resources (CCAMLR). After completing an MSc in Ecology, she joined the British Antarctic Survey (BAS) as a CCAMLR Field Assistant, establishing CCAMLR Ecosystem Monitoring Programmes at Signy Island, South Orkney Islands (and later Port Lockroy on the Antarctic Peninsula) and researching foraging behaviour and population trends in Adelie and chinstrap penguins. Amanda’s passion for science communication eventually led her to take a position as Press Officer at BAS and later a role with the Royal Society for the Protection of Birds (RSPB) developing educational and science events at popular visitor sites in the UK. She also coordinated the British Antarctic Oral History Project for the UK Antarctic Heritage Trust (UKAHT). An Antarctic season at Port Lockroy first introduced her to IAATO operations and the potential for well-managed tourism to create ambassadors for the region’s continued protection. 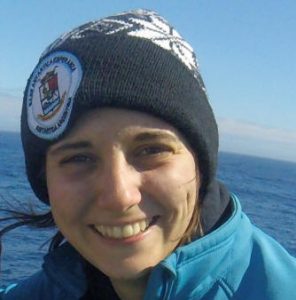 Greta Carrete Vega is a Scientist at Vizzuality (a blogpost about her on the Vizzuality webpage: https://blog.vizzuality.com/post/186028496111/hola-greta), a company that designs webpages showcasing data related to the climate crisis, biodiversity conservation and human rights. Before working at Vizzuality Greta completed her PhD on Forecasting biological invasions in terrestrial Antarctica at the Biodiversity and Macroecology Lab (http://olallalab.com) in Universidad Rey Juan Carlos (Madrid, Spain). Previously, she had completed a Bsc in Ecology at Université Paul Sabatier (Toulouse, France) and the Master Erasmus Mundus in Evolution Programme (https://www.evobio.eu/). 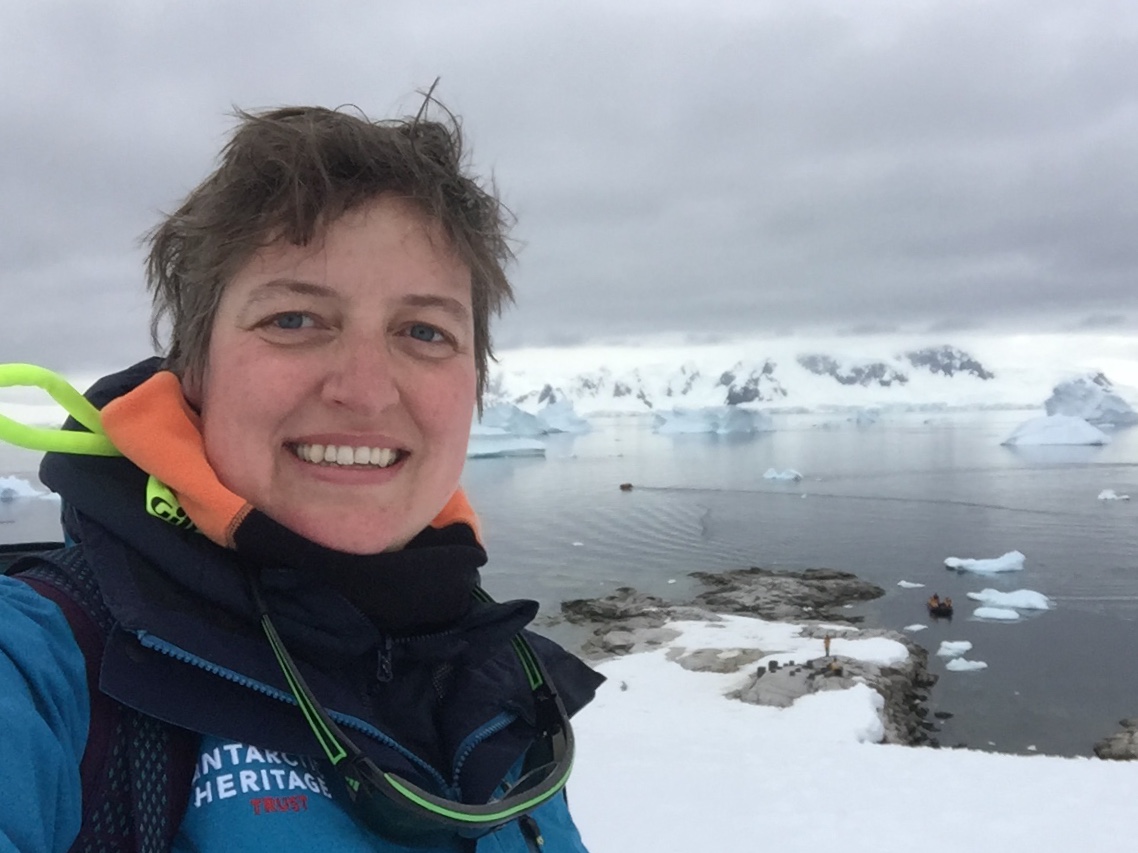 Camilla Nichol is the Chief Executive of the UK Antarctic Heritage Trust (UKAHT), based in Cambridge in the UK. UKAHT is a not-for-profit charity responsible for the preservation of historic sites on the Antarctic Peninsula and delivering a public programme to engage and inspire people with stories of human endeavour in Antarctica.  As Chief Executive she is responsible for running the charity, leading a team to deliver the Antarctic operations; a seasonal operation at Port Lockroy and the ongoing heritage conservation programme, to deliver a range of public-facing activities to reach more people with this heritage and to engage them with Antarctica more widely – these could be museum exhibitions, artist events, talks and lectures, theatre performances, the list is endless. Another important aspect of her role is in championing Antarctic heritage in the wider context of Antarctica, in the heritage and cultural sectors and in advising policy-makers on matters concerned with heritage in Antarctica. Originally Camilla trained as a geologist at the University of Edinburgh before then pursuing postgraduate study in Museum Studies, collecting qualifications in gemmology and museum studies along the way.

Camilla is involved in the wider museums/heritage sector as a trustee of two other charities, external examiner for a museum studies Masters course and recently the Museums Accreditation Committee. She is interested in heritage policy, in how heritage can be an effective lens for wider engagement with science, history and the environment, and the positive impact understanding heritage can have on contemporary issues.

Renuka Badhe currently serves as the Executive Secretary of the European Polar Board (EPB), based in the Netherlands, where her role is to guide and implement the EPB’s vision and objectives, oversee communications, and represent EPB at international fora. She holds a PhD on Southern Ocean phytoplankton physiology, and other degrees in environmental sciences, economics and public policy. Renuka has previously worked with organisations such as the Scientific Committee on Antarctic Research (SCAR), the International Union for the Conservation of Nature (IUCN), and the University of Cambridge. She is an advocate for diversity (both gender and geographical) in academia. She is interested in promoting polar research to wide audiences using a variety of traditional and non-traditional communication tools. Renuka has experience with various aspects of polar science, policy and strategy development and the interfaces between them form her principle area of interest. She has been awarded the 2017 APECS International Mentorship Award.

Gwénaëlle Hamon is the Executive Officer of the World Climate Research Programme’s (WCRP) Climate and Cryosphere Project (CliC), hosted at the Norwegian Polar Institute (www.npolar.no/en/) in Tromsø, Norway. She has more than eight years of experience in environmental project management and holds a Master’s degree in Ecology and Environmental Studies from the University Paris-Sud XI in France. Her first experience working on international environmental projects was through a marine bio-prospecting internship at UNESCO headquarters in Paris in 2007. From 2009 to 2014, she worked as a project officer at the Global Ocean Forum, a non-governmental organization, based at the Gerard J. Mangone Center for Marine Policy of the University of Delaware in the USA, where she coordinated activities related to ocean governance. After her first visit to Tromsø in early 2014, Gwen knew that she would be back in the Arctic eventually!

In September 2014, she joined the CliC office in Tromsø to work with the team on the Arctic Freshwater Synthesis project as well as other CliC activities. She became the CliC Executive Officer in January 2015. 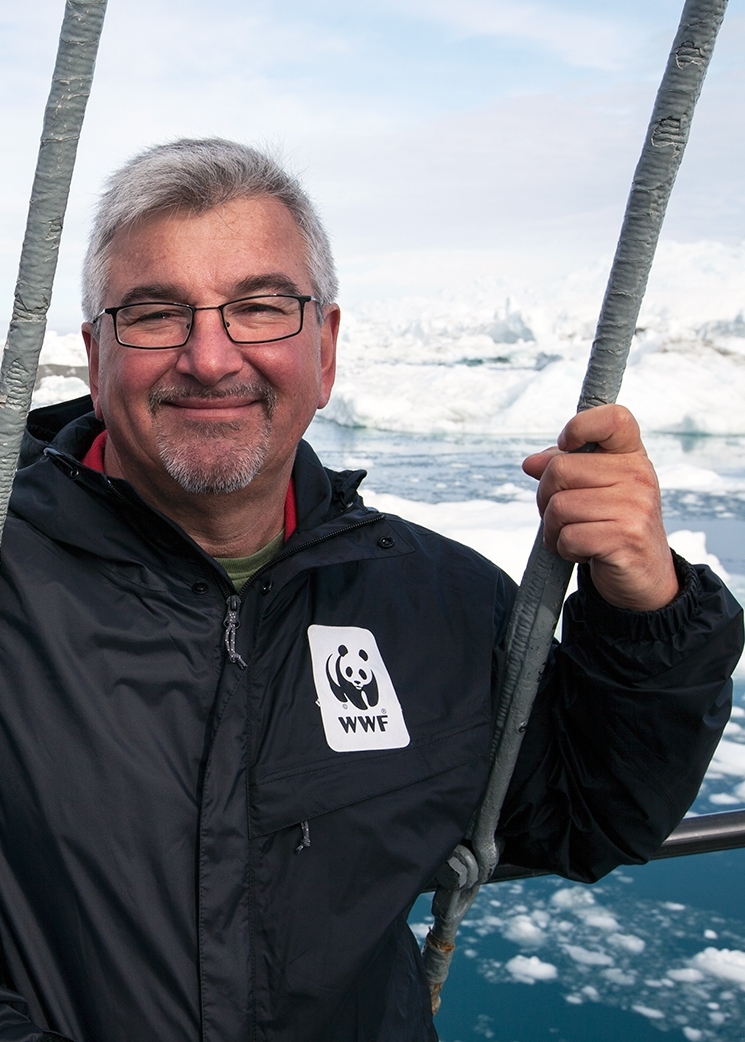 Clive Tesar is an educator and contractor in Arctic communications and policy. He worked for more than a decade as a journalist, starting in print, then working for the Canadian Broadcasting Corporation as a reporter, host, and editor mostly in the Canadian north.

After journalism, he worked as a contractor, mostly specializing in Arctic and Indigenous issues. During this time, Clive worked for the Indigenous Peoples’ Secretariat of the Arctic Council, Canadian federal and territorial governments and NGOs. He delivered research and designed strategies and communications products that produced measurable benefits for his clients, improving public education on issues, and achieving changes in policy.

This left Clive with a good understanding of Arctic issues, and the perspectives of national and regional governments, the NGO sector, and Indigenous peoples’ organizations. For nine years, Clive was the Head of Communications and External Relations for WWF’s Global Arctic Programme. 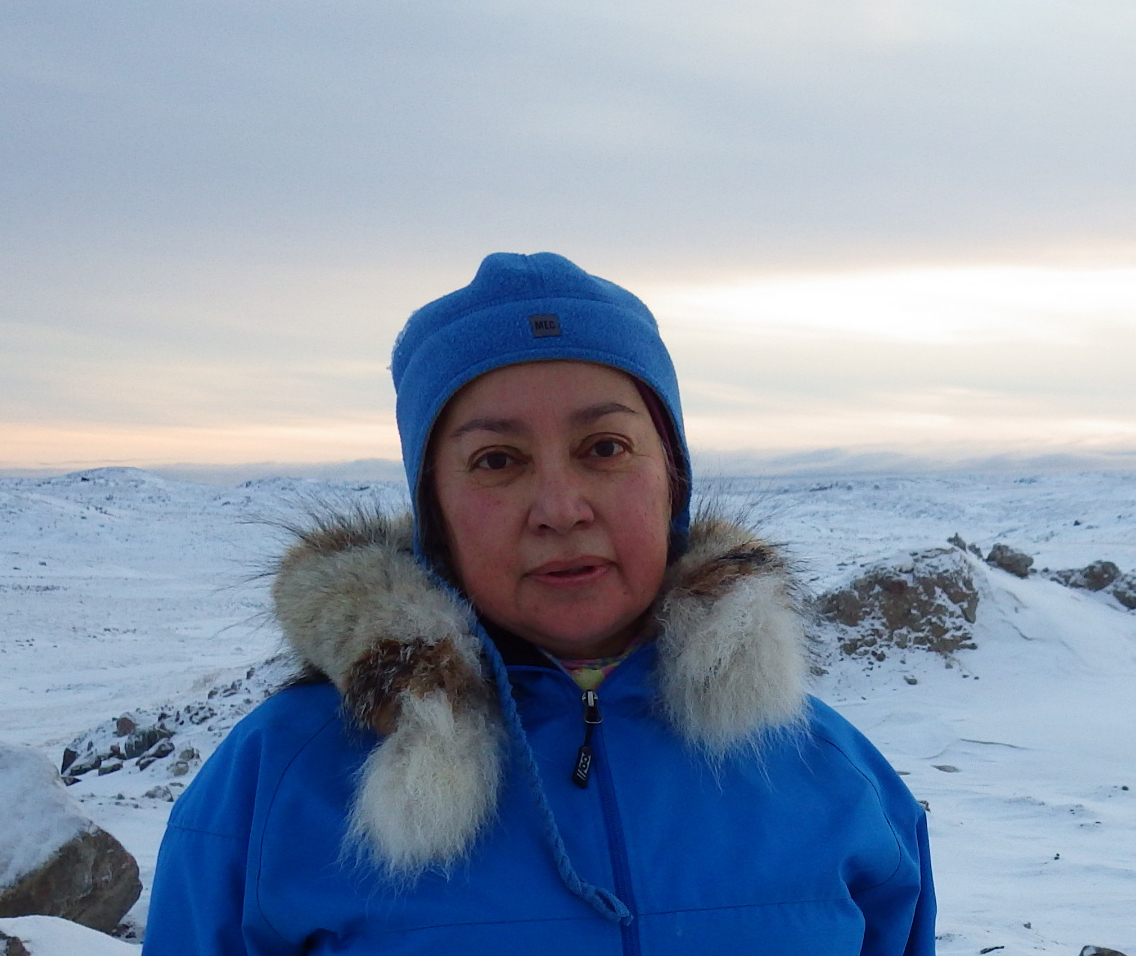 Vicki Sahanatien has lived and worked in the Arctic since the mid-1990s when she moved to Inuvik, Northwest Territories to work in Ivvavik National Park and be the first female Chief Park Warden in Canada. Since that time, she worked in the environmental and wildlife research fields from the Alaska border to Baffin Island and north to Ellesmere Island.

Her most recentresearch effort was completing her Ph.D. (2015, University of Alberta) on the Polar Bears of Foxe Basin, Nunavut, Canada, where she studied polar bear sea ice habitat, space use and movements. As part of her doctoral research, she also interviewed Inuit elders and hunters about polar bear behaviour, distribution and habitat use. Throughout her career, Vicki has worked with indigenous people incorporating their traditional knowledge in land management, monitoring and research programs.

Vicki is the Director of Wildlife Management of the Nunavut Wildlife Management Board (NWMB). The NWMB is an independent tribunal established by the Nunavut Agreement and is the main instrument of wildlife management and regulator of access to wildlife in the Nunavut Settlement Area. It makes decisions on total allowable harvest, quotas, non-quota limitations, basic needs levels, and habitat protection for terrestrial and marine wildlife species. The NWMB also provides advice on marine management the offshore areas adjacent the Nunavut Settlement Area. The NWMB vision is “conserving wildlife through application of Inuit Qauimajatuqangit and scientific knowledge.”

Vicki is a member of the Range States Human-Polar Bear Conflict Working Group, Association of Polar Early Career Scientists (APECS-Canada), and City of Iqaluit Recreation Committee. Vicki has been based in Iqaluit since 2000. She loves the arctic wilderness and particularly enjoys the 7 month ski season on Baffin Island where she lives. 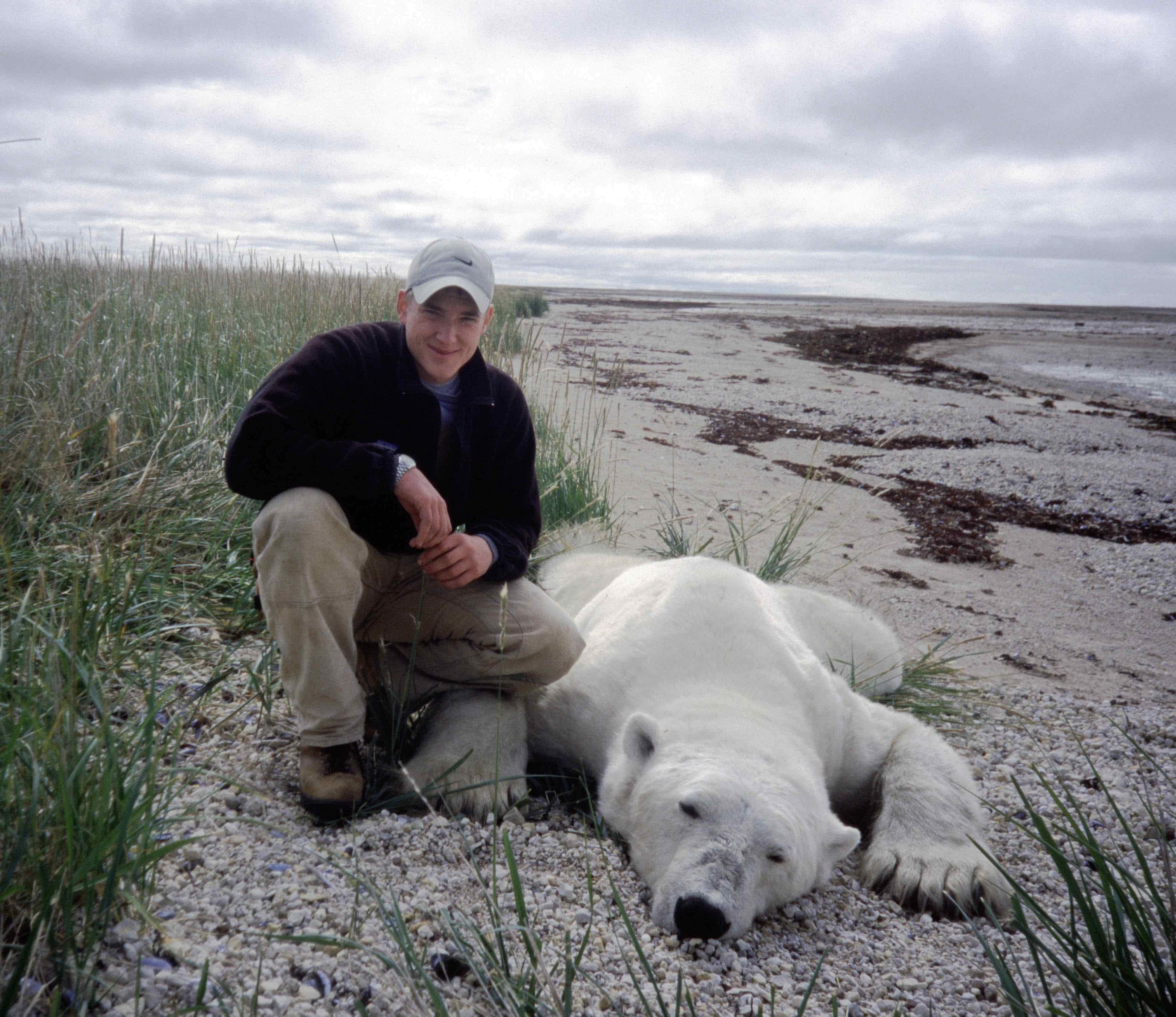 Evan Richardson is a Polar Bear Research Biologist with the Wildlife Research Division in the Science and Technology Branch of Environment Canada. Evan is originally from Winnipeg, Manitoba where he completed his undergraduate degree in Zoology at the University of Manitoba. He began working in western Hudson Bay as an undergraduate student doing research on arctic and red fox den site selection. Evan began working on polar bears in 2001 for his MSc. and continued studying polar bears for his Ph.D. at the University of Alberta. He has been involved in polar bear research in several of Canada’s polar bear subpopulations including the western Hudson Bay, southern Beaufort Sea, northern Beaufort and Viscount Melville polar bear populations.

Evan’s research interests are broad and include understanding the evolutionary ecology of polar bears, their mating systems, population genetics, habitat selection and the influence of stressors (e.g. contaminants, climate, industrial development) on polar bear populations. Evan also works with aboriginal organizations to try help integrate Traditional Ecological Knowledge (TEK) into polar bear management. He has been a member of the IUCN/SSC Polar Bear Specialist Group since 2013.

Laura Forsström is a Science Adviser in the Biosciences and Environment Research Unit at the Academy of Finland. She has a Ph.D. in hydrobiology from the University of Helsinki (2007) and worked as a post-doctoral researcher during 2007-2013, focusing on carbon flux and the role of organic matter in arctic freshwater ecosystems. Her field work covered Finnish Lapland, Komi Region in Russia, NE Greenland and Northern Quebec, Canada. She has also worked as a Senior Officer at Centre for Economic Development, Transport and the Environment, Uusimaa, Finland, and as a Conservation Officer at WWF.

Laura is a member of the Freshwater Expert Network of CAFF’s Circumpolar Biodiversity Monitoring Programme and has been a visiting teacher at Arctic Winter Limnology field course in Svalbard, The University Centre in Svalbard, for several years. 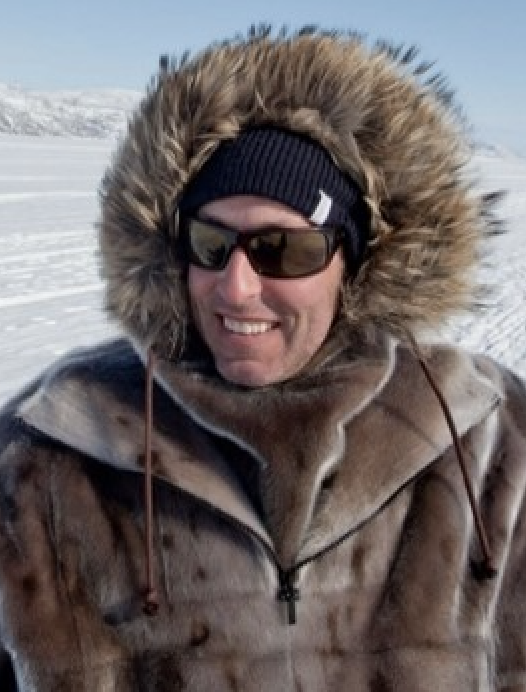 Lawrence Hislop is from Montreal, Canada and has more than ten years of international experience leading UN and EU funded projects, and has produced many environmental assessments and related communications products. From 2009-2014, Lawrence led the Polar and Cryosphere programme at GRID-Arendal in Norway and collaborated on projects with the Arctic Council, University of the Arctic and UNEP-linked activities in Polar and mountain regions. He was also on the management team of the Himalayan Climate Adaptation Programme (HICAP) from 2011 - 2014 and initiated long-term research on environmental impacts in Nepal, India, Pakistan and China.