APECS was again a partner of the Arctic Frontiers 2015 conference in Tromsø, Norway from 18 – 23 January 2015 with the theme "Climate and Energy" and contributed to the Young Scientist Forum with a number of activities:

APECS collaborated with Arctic Frontiers and the High North Academy to hold a Science Communication and Media Training Workshop on 20 January 2015 at the Arctic Frontiers conference 2015 held in Tromsø, Norway. The workshop was open to attendees from Tromsø (including the UiT The Arctic University of Norway and the Norwegian Polar Instiute) as well as participants of the Arctic Frontiers conference. The four-hour workshop included a series of presenters to discuss how scientists can communicate their work more effectively to journalists and non-scientific audiences, as well as using the tools available in social media. This included the use of blogs, twitter and podcasts. It also introduced them to the work of journalists, how they find a good scientific story and how they condense the complicated scientific research into a language that is understandable to the general public.

APECS would like to thank all the workshop mentors for their participation and great advice: Katrin Leinweber (University of Konstanz, Germany), Tom Fries (Arctic Council Secretariat, Norway), Karoline Bælum (Svalbard Science Forum), Malin Avenius (Freelance Science Journalist, Sweden), Tom Yulsman (University of Colorado, USA) and Susan Moran (freelance print journalist and a host/producer of KGNU radio's science show, How On Earth , USA). We would also like to thank the participants for the excellent discussion that followed the presentations. 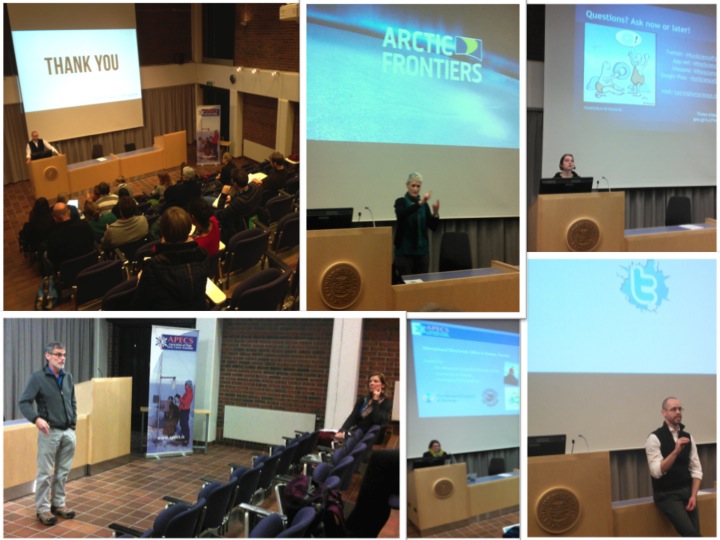 Between January 20th and 22nd APECS, in cooperation with the Nordnorsk Vitensenter Tromsø and Arctic Frontiers promoted for the second time the Science for Schools event at Nordnorsk Vitensenter Tromsø, as a side event of the Arctic Frontiers 2015 conference. The goal? To instill the fascination towards science in high school students! Invited young scientists gave lectures to students from schools in Tromsø, sharing their experience and personal insight as scientists in polar fields. Coming from different countries, they explained the work they conduct and its relevance on a global scale. The students went on a journey through the reality of thawing permafrost, the mysterious northern lights, the cute algae growing under sea ice and the tiniest creatures habiting the oceans upon which every marine creature depends on (yes, you got it right... phytoplankton!). 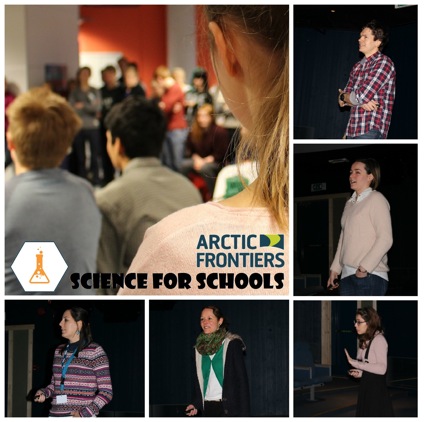 The students also held their very first scientific poster session. And like as in a real conference, the posters were assessed by (although not so scary) judges: the scientists themselves! The poster session impressed everyone, we must admit! Students surprised with their creative titles and an early awareness on environmental issues and climate related themes. They also delighted everyone with engaging communications on broad topics such as the iconic endangered polar bear; the always invasive salmon from fish farms or even sea pollution from the annoyingly persistent plastic... The winning posters stood out by scientific rigor, design and communication of it.

We hope the students got the perks of doing science in cool places and got enthusiastic on a future scientific career. Because they surely showed the potential of pursuing one. 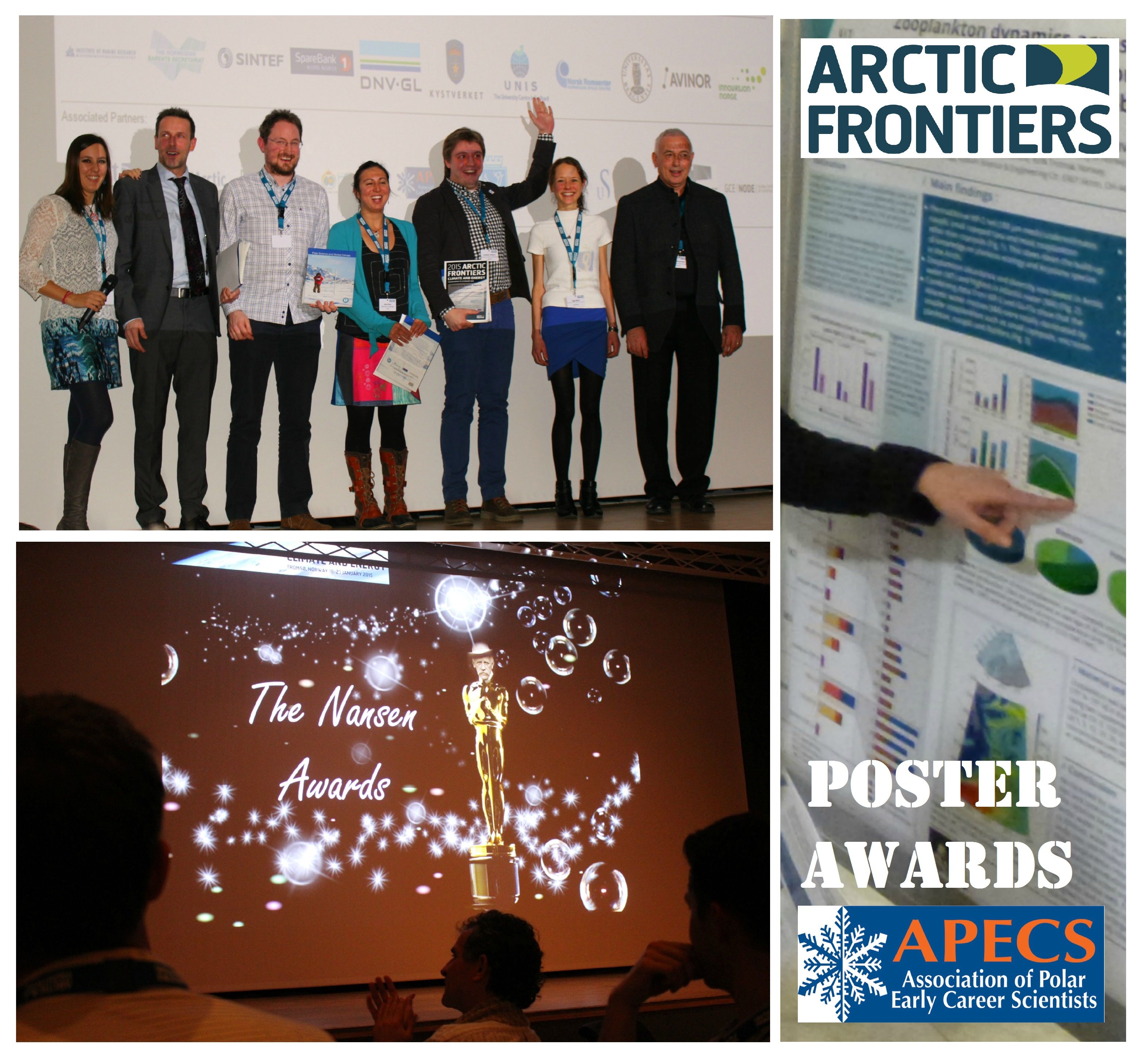 This year at the Arctic Frontiers Conference, APECS organized once more the Poster awards for early career scientists. However, this time there was something different.

The poster session took place on Thursday after lunch and both the early career scientists and the experienced scientists were shinning next to their posters willing to tell everyone about their research. The secret poster evaluation committee (SPEC), consisting of members of the Arctic Frontiers Scientific Committees and some early career researchers, infiltrated themselves in between them and started asking questions and looking with critical eyes towards the content, colors, the pictures, the graphs and everything else on the poster. Some of us were not so discrete and had our evaluation sheet on our hand and were giving grades as the presenter was speaking. Others discussed the content of the poster and spent quite a long time discussing with the poster presenter all the details of their work. All in all, we had 2-3 intense hours of judging the content, structure and performance of the more than 50 posters from all early career scientists attending the meeting.

Once the poster session was over and everyone returned to the Auditorium for the next session it was time for final decision making. And we can tell you, the posters were so good in general that it was really difficult to make a final decision. Based on the points given by the secret reviewers and the performance of the person presenting the poster, we picked a winner per science part and an overall winner.

Since we were in Tromsø and science is not less than cinema, we decided to give a significant name to the awards this year: The Nansen Awards!

The ceremony took place during the conference dinner on Thursday night at the Scandic Hotel. All scientists arrived, well dressed and also well wrapped up for the cold since we were at -10°C! The buffet offered several Norwegian specialties and our toastmaster, Lars Smedsrud, made us enjoy the exquisite wine and the food very much.

The Nansen Awards ceremony started during the dessert and it was a sweet end for the great dinner. Inga Beck and Mar Fernandez Mendez, in representation of APECS, conducted the ceremony. In addition, exactly like at the Oscars, we had a celebrity to hand in the awards to the lucky winners: Prof. Paul Wassmann from the UiT The Arctic University of Norway, a member of the Arctic Frontiers scientific committees and a long-term APECS mentor. The four, very surprised, winners received from his hands a wonderful book with a compilation of outreach activities for Polar Science and a voucher for free registration (overall winner) or one-day registrations (for winners of the 3 science parts) to attend one of the next editions of the Arctic Frontiers conference. And without further delay, the winners are..

From APECS we would like to congratulate again the four winners for their excellent work and we encourage early career scientists to participate in upcoming conferences showing what they are capable of. A special thank you especially to the members of the Arctic Frontiers Science Committees for helping to evaluate the posters and for the rest of the secret poster evaluation committee members for coordinating and presenting the awards!