APECS organized a fascinating panel discussion on Tuesday 23 January during the Arctic Frontiers conference entitled “Adventures in the Field”. Inspired by the work that APECS is doing as part of the INTERACT project, the panel discussion focused on what it takes to do fieldwork in the Arctic. Four speakers, with many years of experience between them, shared many of their stories, anecdotes, and advice with an enthusiastic audience of over 40 people. Ingrid Wiedman (University of Tromsø) shared her experience of doing fieldwork from research vessels and how one needs to ensure excellent planning and communication when one is a scientific cruise leader. Alex Messerli (Norwegian Polar Institute) also highlighted how important it is to have detailed plans as well as several backup plans. She pointed out how essential it is to have a good field team that is well-informed and aware of each of their responsibilities. Morten Rasch (University of Copenhagen) shared a few stories from his perspective as station manager and leader of the INTERACT station manager’s forum. Being well prepared to go out into the field makes the station staff’s lives much easier, and is particularly important in view of safety and avoiding any possible rescue operations. Morten also highlighted how as early career researchers one should focus on the smaller and ‘relatively easy’ to obtain funding opportunities that are available, for example, the INTERACT transnational access programme. Svein Mathiesen (International Centre for Reindeer Husbandry) gave an excellent overview of how fieldwork in the Arctic, particularly through working with local communities, had changed his life. He shared several very funny anecdotes as well as much good advice. A healthy discussion with the audience rounded off a well-appreciated and interesting hour talking about adventures in the field!

Continuously growing in popularity, this year’s edition of Arctic Frontiers Science for Schools, organized by APECS and the Science Centre of Northern Norway, brought together well over 100 students from five different schools in Tromsø. Living above the Arctic circle means the kids are very familiar with ice and snow, but most of them have so far not had the occasion to see what scientific research really entails. Scientists from five different countries, either living in Tromsø or abroad, shared their first-hand experiences of what it’s like to do research in Polar environments – whether it be drilling ice cores, investigating the rich sea life through diving or deep-sea cameras, or learning about permafrost through cartoons. They were amazed by the beautiful underwater photography of Peter Leopold and fascinated by Kirstin Werner explaining how ocean sediment cores can be used to say what the climate was like thousands of years ago. Thanks to Polona Itkin and Anja Rösel they also nearly all got a chance to saw through a real piece of sea-ice and find out just how salty it really is!

After the presentations and hands-on experiences it was the turn of the students to impress us with their excellent posters. Grade 10 classes presented their projects on Tuesday and Thursday, while the more advanced grade 12 class presented the experiments they had carried out on Wednesday. For many of them this was the very first time they presented a poster at a mini scientific conference – and they did an absolutely fantastic job! The level of English was just astounding, not to mention their enthusiasm as well as the well-thought out research projects.

The excellent quality of all the projects meant that for those of us serving as judges we had an extremely difficult task on our hands! We evaluated the posters and learnt a lot from the students through our discussions about their topics of choice, which ranged all the way from understanding the impact of climate change on different Arctic species through to whether munition from the local shooting range was polluting nearby freshwater streams.

After some very difficult decisions, we chose one winner from each day of the event. They were: My name is carbon, black carbon (Tuesday); Heavy metal seaweed (Wednesday); and An ocean of problems (Thursday). The overall winners of the Grade 10 classes was An ocean of problems. There is definitely enormous potential in the next generation of scientists!

We want to warmly thank all the great speakers who volunteered their time to be part of the Science for Schools event: Anja Rösel, Polona Itkin, Charlotte Havermans, Julie LePage, Kristin Werner, Peter Leopold, Lawrence Hislop, and Mona Fuhrmann. 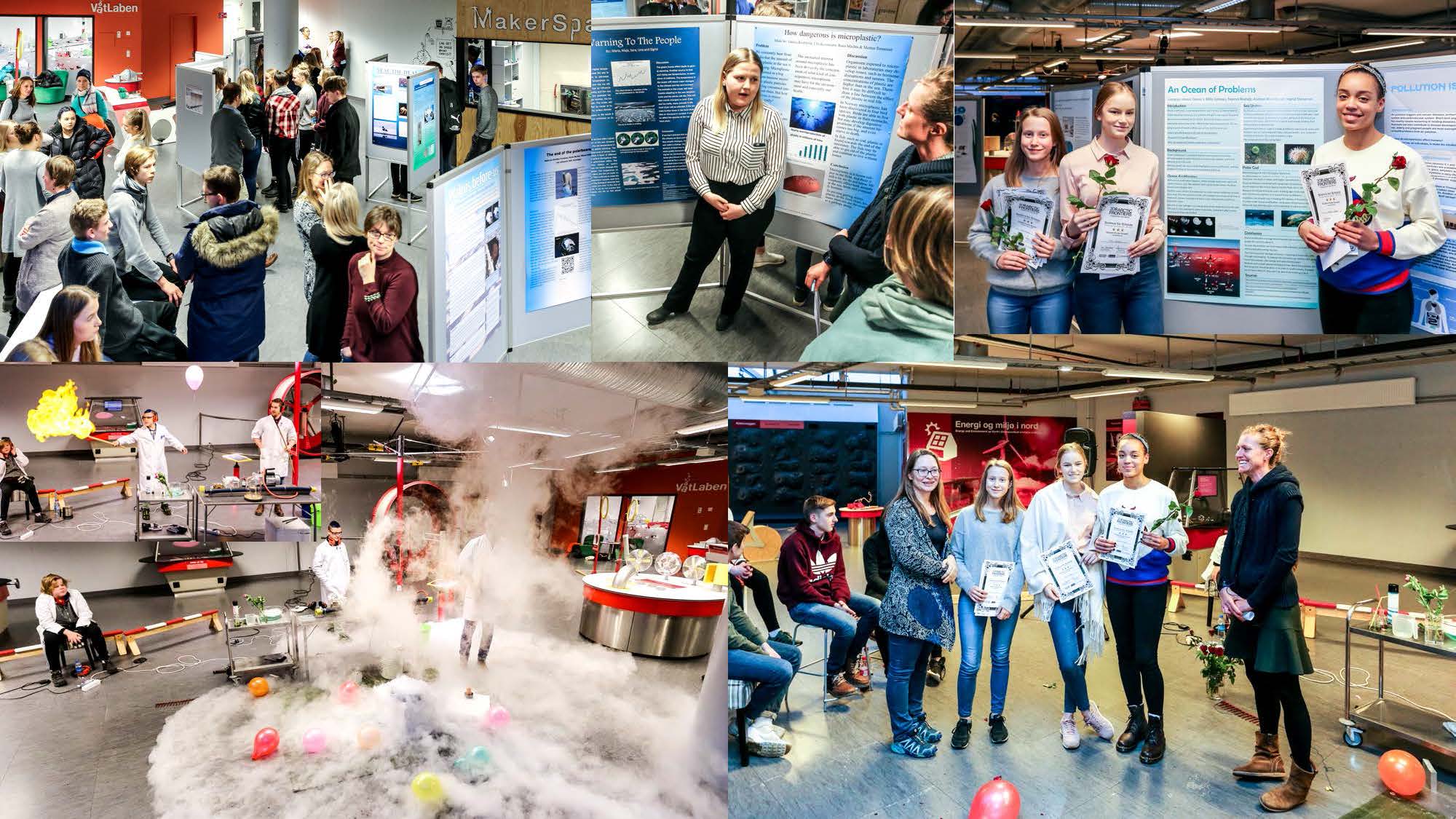 This year the Arctic Frontiers 2018 poster session was held on 24 January and, new this year, in the city centre at the Scandic Ishavshotel. A team of judges helped evaluate the posters across the four themes: Aquaculture in the High North in times of change; Circumpolar Safety, Search and Rescue Collaboration; Resilient Arctic Societies and Industrial Development; and The New Arctic in the Global Context. With more than half of the nearly 70 posters being from early career researchers and the excellent quality of posters, the competition was tough! In the end, after a difficult decision, the three winners were chosen. The excellent prizes sponsored by Arctic Frontiers were awarded at the Science Conference dinner also at the Scandic Ishavshotel. A warm congratulations to: