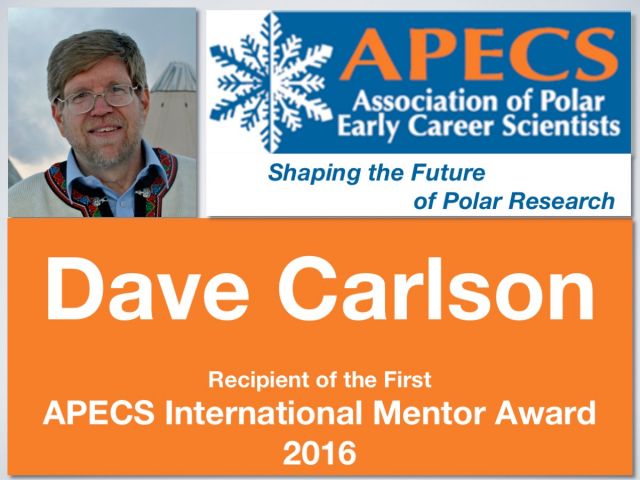 APECS is proud to announce that the recipient of the inaugural APECS International Mentorship Award 2016 is David Carlson. The award was presented to him during the Arctic Observing Summit 2016 in Fairbanks, Alaska. The award was established to recognize and honor the efforts of our mentors within the international polar science community and acknowledge their time and energy in building a supportive community. There could not be a more deserving recipient of this award.

It was Dave’s support during the International Polar Year that was instrumental in the establishment of APECS and his mentorship over the years has helped APECS grow into the organization it is today.

We received an astounding number of letters nominating Dave for this award, describing Dave as a “mentor of historical proportions.” These letters also featured personal stories – how someone, after a chance meeting with Dave at a conference – gained a valuable and insightful mentor in research, outreach, and life.

Dave has again and again championed outreach and education as a critical part of scientific research. His dedication to making sure our work is shared with diverse audiences has certainly been a boon to the field as a whole. He inspired many polar researchers and generations to come to do education and outreach and to communicate their research about the Polar regions.

Dave also has a remarkable skill for bringing people together, and he has channeled that to creating opportunities around the world for early career scientists. His incredible dedication to mentoring both the APECS and individual early career researchers has opened an untold number of doors and shaped dozens of careers.

APECS would like to thank Dave for everything that he has done as a mentor for both our organization and for so many of us as individuals. The APECS International Mentorship Award is a small token of our enormous gratitude for Dave’s time, wisdom, and passion over the years.

David Carlson is currently the Director of the World Climate Research Programme (WCRP), where he facilitates analysis and prediction of Earth system variability and change with relevance, benefit and value to society. He is co-founder and co-Chief Editor, with H. Pfeiffenberger (Alfred Wegener Institute), of Earth System Science Data, an international data publication journal. Dave supported the establishment of APECS during his tenure as Director of the International Polar Year (IPY) International Programme Office, where he organised, managed, coordinated, represented and supported the international interdisciplinary science program. Previously he was the Director of the Atmospheric Technology Division at NCAR, Director of the Tropical Ocean Global Atmosphere (TOGA) Coupled Ocean Atmosphere Response Experiment (COARE) International Project Office, and Associate Professor in the College of Oceanography at Oregon State University.

To watch the presentation of the APECS International Mentorship Award to Dave Carlson at AOS 2016 click here and scroll down to AOS Plenary Session (E) - 18 March - 8:45 am to 10:45 am. The award is presented 56 minutes into the video.