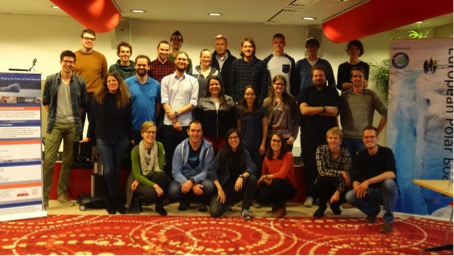 In the fall of 2016 the national APECS committees of the Netherlands and Belgium joined efforts in organizing a shared symposium. Organizers of the symposium were Ariadna Szszybelski and Douwe Maat from the APECS NL board and Henrik Christiansen and Igor Stelmach Pessi from the APECS BE board. The symposium was held on the 2nd of November in the headquarters of the Netherlands Organisation for Scientific Research (NWO), and was financed by this same organisation. Douwe and Igor kicked-off the symposium with a welcome and a shared presentation on the different ways in which APECS can be beneficial to early career polar researchers. During the day two invited speakers climbed on stage. The first invited speaker was Kees Rade, the Dutch Arctic Ambassador, who informed us about the Dutch Polar Strategy until 2020. He explained which Dutch ministries are involved in polar politics and on which pillars this is based: sustainability, economy, research and geopolitics. This was followed by an interesting discussion on the interface of science and politics. The second speaker was Joseph Nolan from the European Polar Board (EPB), who explained what the EPB does and how scientists can benefit from it. This talk was followed by a discussion on what EPB can do for early career scientists. Possibly the EPB can be a platform for exchange of early career scientists amongst different institutes and universities, but at the moment there are no concrete ways yet.

Over the day, 8 APECS members, being Andrea Cabrera, Henrik Christiansen, Sebastiaan Koppelle, Eveline Pinseel, Hans Slagter and Stef Bokhorst, presented their scientific work on very different topics, such as the demography of Arctic marine mammals, evolutionary history of polar diatoms and iron in the Arctic Ocean. In addition, Heather Mariash, current APECS ExCom member, informed the public about Polar Educators International and her own role in APECS. Esther Kokmeijer, an artist and APECS Netherlands board member, showed different ways in which art can be used as a form of communicating science, without toning down on either art or science. We were pleased with the special attendance of three high school students, and hopefully APECS members to be: Maarten Burggraaff, Mees van Rhijn and Menno Hosper. All three students have been to the Arctic for their final exam projects and Mees gave a talk about his work on the color of polar bear fur. The last session of the meeting was by Ariadna and Henrik, who explained in which ways APECS members can contribute to APECS as an organization or to APECS’ aims, such as education and outreach, and in which ways peoples contributions would benefit them.

A total of 27 people attended in a nice mix of different scientific career stages from high school student to postdoc. A short questionnaire for feedback and suggestions was send around. In general the responses were very positive. The symposium was experienced as a good mix between scientific talks, politics and discussion. Although some people had to travel quite far, the location and venue were also well-accepted. Some suggestions for improvement were for instance an evening program with more time for discussion and networking, a more general part of the meeting in which APECS topics such as planning of new events can be discussed, and more information on the Dutch and Belgian polar research programs. All in all, also the organizers of the Dutch and Belgian national committees were very pleased with the attendance of the meeting and the quality of the talks. For the near future both committees are looking forward to more of these fruitful collaborations or contributions to each others activities. The talks of the organizers, pictures of the symposium and more information on the program is available on the Dutch and Belgian national committee websites: apecsnl.wordpress.com and apecsbelgium.wordpress.com.