Between January 20 – 24, the 13th Arctic Frontiers conference was held in Tromsø, Norway. The annual conference is an international event, linking policy makers, industry and academia focusing on the Arctic regions.

With its harsh physical environment demanding specific adaptations in fauna and flora, rich biodiversity, particular seasonal patterns of polar day and polar night, and its vast energy and marine resources, the Arctic is of significant interest to industrial, political and societal organizations across the globe. It is also home to indigenous peoples. The Arctic Frontiers conference aims to couple academia with decision makers for responsible and sustainable development of the Arctic during climate change. Arctic Frontiers Young brings together an international community of young scientists, students and young professionals to share knowledge and new perspectives on development in the nordic regions. This year, APECS contributed to the Arctic Frontiers Young programme with several activities:

The sun returned during Arctic Frontiers, where APECS was involved in a variety of activities.

In 2019, APECS arranged a panel on “Scientific publications” during the Arctic Frontiers conference. The panel was held on Tuesday evening, 18:30-19:30, at Fram Centre. The main topic was how publications will affect early career scientists; how to judge their quality, how to navigate between discussions about open access and alternative ways of publishing, and how this will affect publications-based judgements of early career scientists (e.g. for applications for future positions and funding). The three speakers Tom Arne Rydningen, Helle Valborg Goldman, and Kathrin Helen Hopmann gave inspiring talks and 10 early career researchers engaged in a lively discussion about journals Impact Factors, publication strategies, and the benefits of reviewing activities.

The panelists sparked a lively discussion about publication strategies, reviewing, and its career impacts.

Tom Arne Rydningen, associate professor at the department of Geosciences at UiT The Arctic University of Tromsø, highlighted strategies of oral or poster presentations at conferences which can lead to a different kinds of feedback. From his experience with the paper writing process, he also recommended in-house reviews and language checks by native speakers before submitting the manuscript.
Helle Valborg Goldman, from the Norwegian Polar Institute and chief editor of the multidisciplinary journal Polar Research, deconstructed the Impact Factor, how it is calculated, and gave insights how journals can boost their own Impact Factor. In addition, Helle discussed other metrics that allow to better evaluate a journals quality and measuring productivity and impact of individual researchers over time.
Kathrin Helen Hopmann, associate professor in Chemistry at UiT The Arctic University of Tromsø, gave insights which of her publications had an impact on her research career, particularly in securing grants to build up her own research group. She recommended post-docs publishing independently from their former PhD supervisor team, being corresponding author, or writing single author papers to show independent research.

The panelists agreed that Open Access publications have clear advantages despite being costly. When it comes to choosing journals, the Impact Factor is the most widely used journal metric and is often understood as a proxy for journal quality. The Impact Factor represents the average number of citations during one year received by a journal’s articles published the during 2 preceding years. Helle Goldmann explained the method behind calculating it and its caveats. All in all, judging the quality of a journal is not a simple task and the Impact Factor and it should not be taken as the only measure! The debate moved on to deliberately discussing benefits of reviewing manuscripts, either as an in-house review or when becoming a peer reviewer with journals, as this can be a helpful exercise for early career scientists to improve writing and to enhance critical thinking. The EOS paper A Quick Guide to Writing a Solid Peer Review and Publons, a website and free service for academics to track, verify and showcase their peer review and editorial contributions for academic journals, were recommended.

The winner of the 4th edition of the Nansen Poster Awards is...

For the 4th time, APECS and Arctic Frontiers arranged the Nansen Poster Awards. During the 2019 Arctic Frontiers conference, 19 poster judges evaluated 38 posters that were presented in two sessions. The evaluation criteria included the visual appearance of the posters, the content and presentation of data, the quality of research, and the skills of the presenter. The winners receive travel support and/or registration for an upcoming Arctic Frontiers conference in 2020, 2021, or 2022.
Many skilled presenters had travelled to Tromsø in January to enter the tight competition. With differences of only a few points, the winners of the 4th edition of the Nansen Poster Awards in 2019 are:

Congratulations to Amy, Sanna and Justine! 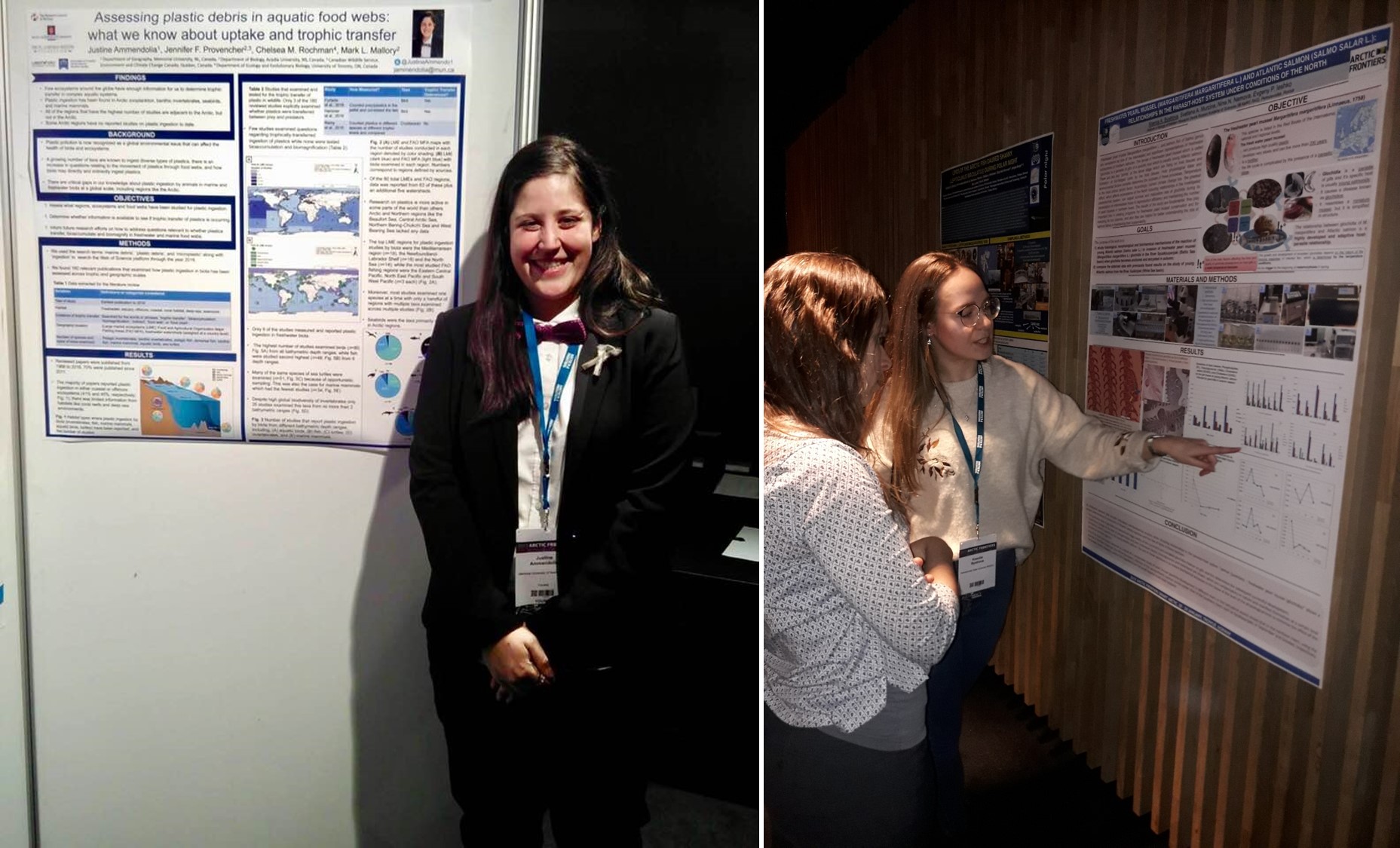 For the 5th time, 10th and 12th grade Tromsø school kids had their own conference during Arctic Frontiers. Science for Schools was arranged in cooperation with Vitensenteret, Arctic Frontiers, and APECS. During three days, early career researchers gave plenary lectures with hands-on experiences in the morning that were followed by poster presentations of the school kids and a science show in the afternoon. The school kids had picked a topic of their interest and prepared a poster about it. All posters were presented to and evaluated by the early career researchers.
Each day, the best presentation was awarded with a culture card for Tromsø. The overall winner of the 10th graders was the poster entitled “Unenthusiastic for Microplastic” from Tromsø International School. The evaluation committee was impressed about the kid`s enthusiastic presentation, their well organized poster, their background knowledge, the changes they made in their everyday lives to inspire others, and their suggestion of a plastic tax. The 10th graders overall winners price is a visit to the Kongsberg satellite observation and research facility in Tromsø for the entire school class.
The 12th grade winner poster was called “Codmium for dinner” and was a study about heavy metals in cod from Kongsbakken Videregående Skole. The kids had done an interesting study with clear conclusions, understood their topic well and made a good presentation. In general, all jurys were impressed about the quality of the posters. The 12th graders overall winners price is a visit to a research site that focuses on fish and marine food products (Havbruksstasjonen) near Tromsø for the entire school class. A report and photos are published on the school`s webpage (in Norwegian).