On December 10th, 2018 USAPECS held a panel on Diversity and Inclusion in the Polar Sciences at the 2018 American Geophysical Union Fall Meeting. 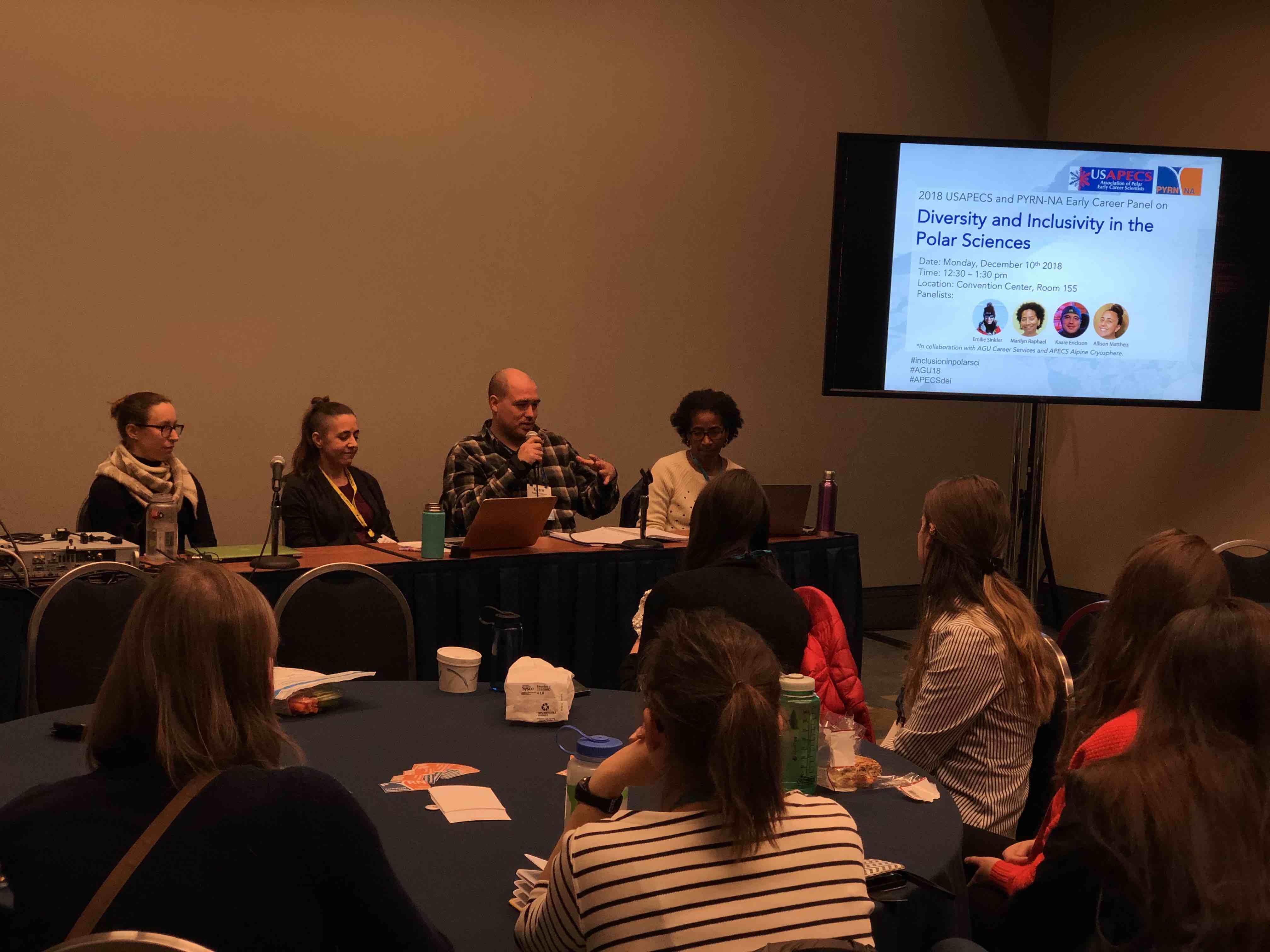 Planned in conjunction with the Permafrost Young Researchers Network, North America (PYRN-NA) and APECS Alpine Cryosphere, the panel session focused on discussing: (1) the current challenges facing minority groups and women in our disciplines, such as barriers to entry for underrepresented groups, sexual harassment at work and in the field, and representation of indigenous knowledge in the polar sciences; (2) what we as individuals can do to bring these issues to the forefront of conversations in scientific organizations and universities; and (3) strategies to promote diversity and inclusion of underrepresented perspectives in the polar sciences. Panelists offered perspectives on how to encourage and promote inclusivity in the polar sciences based on their own experiences.

We were joined by panelists Emilie Sinkler, a Ph.D. student in glaciology at the University of Alaska Fairbanks, Kaare Sikuaq Erickson who works for UIC Science, Allison Mattheis, an Associate Professor in the division of Applied and Advanced Studies in Education at California State University Los Angeles, and Dr. Marilyn Raphael, a Professor of Geography at UCLA. More information about each of these panelists can be found on the webpage for the event.

Allison Mattheis: “After you climb the ladder, build a ramp so barriers for others aren’t there anymore. Actively work to improve diversity & inclusion. It’s easier to do nothing but things won’t change without action.” (Tweeted by Ellyn Enderlin)

Kaare Erickson: "when you go to the #Arctic for your research, be aware for you it means to "go to the field", but it may be someone else's backyard and home." (Tweeted by Caroline Coch)

“Marilyn Raphael shares her biggest challenge in science: Overcoming shyness. Her advice is to become part of a community and to find your support there.” (Tweeted by Caroline Coch)

Marilyn Raphael: “Students tend to leave school when they feel like they don't belong. When you teach, you need to make sure to teach in a way that makes every student feel like they belong.” (Tweeted by Meghan Nicole)

Allison Mattheis: “You shouldn't have to be loud and pushy, there should be places where you can shy and quiet but still be respected for your intelligence” (Tweeted by Meghan Nicole)

“We need to *consciously include people* if we actually want to see more diversity in the (polar science) community.” (Tweeted by Allen Pope)

“...Changes are needed at many scales! Some are personal attitude changes that you have to work on, some are at a group level that you can communicate about, & some are institutional that you have to organize for.” (Tweeted by Celeste Labedz)

“Role models at home and early stages of career make a difference. Get out there and support aspiring scientists!” (Tweeted by PYRN North America)

There were so many more inspiring quotes in addition to these, and we hope that everyone who attended was able to take something valuable away from the panel. Thanks to everyone who helped organize the panel in some capacity, and thanks so much to our panelists for sharing your insight on we as a community can help shape polar research in a way that encourages diversity and inclusion in all spaces. 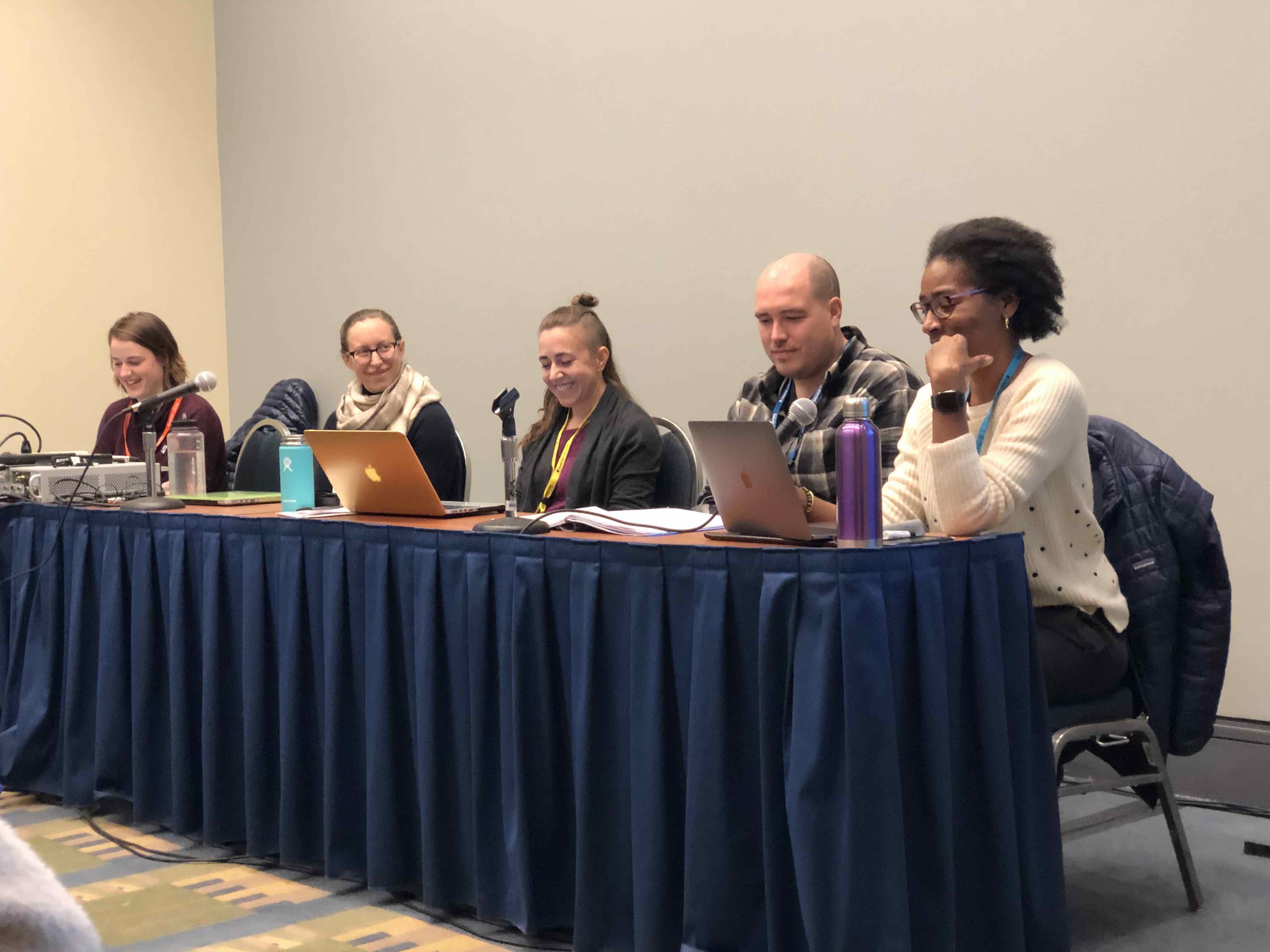