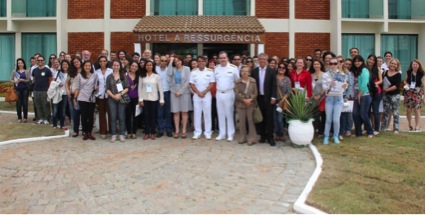 The APECS-Brazil coordinated its third Symposium held in Arraial do Cabo, Rio de Janeiro, from 16 to 22 September 2014. The event was an ideal space to join early career, educators and seniors researches and we promoted five days knowledge exchange and integration among all attendees. The 2014 Symposium was dedicated mainly to scientific discussions between researches and educators, seniors and early carriers, who developed scientific or educational activities in Antarctica or in the Arctic, besides activities related to the marine environment. APECS-Brazil promoted opportunities for professional career development by talks (20) and short courses (19) to our audience. APECS-Brazil also promoted web cast of 4 talks during the event to schools and other public. The ECRs gave 11 oral and 12 poster presentations during the event. A great goal of APECS-Brazil symposium was include educators (20) from Basic Education to promote education and outreach activities as integral components of polar research and to stimulate future generations of polar researchers. We also organized a Picture context and a “Photograph Exhibition: Glimpses on a frozen continent” that will circulate around the country in Schools. The attendees (about 200 per day) were mainly undergraduate students, professional researchers, teachers (20) and military — especially the Brazilian Navy, which hosted the meeting in one of their facilities. We rely on presence by over 200 people during the event and about 2000 people via live streaming and APECS-Brazil additional activities in the website (during the preceding week in Canoas, Rio Grande do Sul, more then 40000 people, mainly students, took part in the activities of our XII International Polar Week). The recorded lectures was available in APECS-Brazil Facebook page. The abstract book is available on APECS-Brazil website (http://www.apecsbrasil.com/publica/).