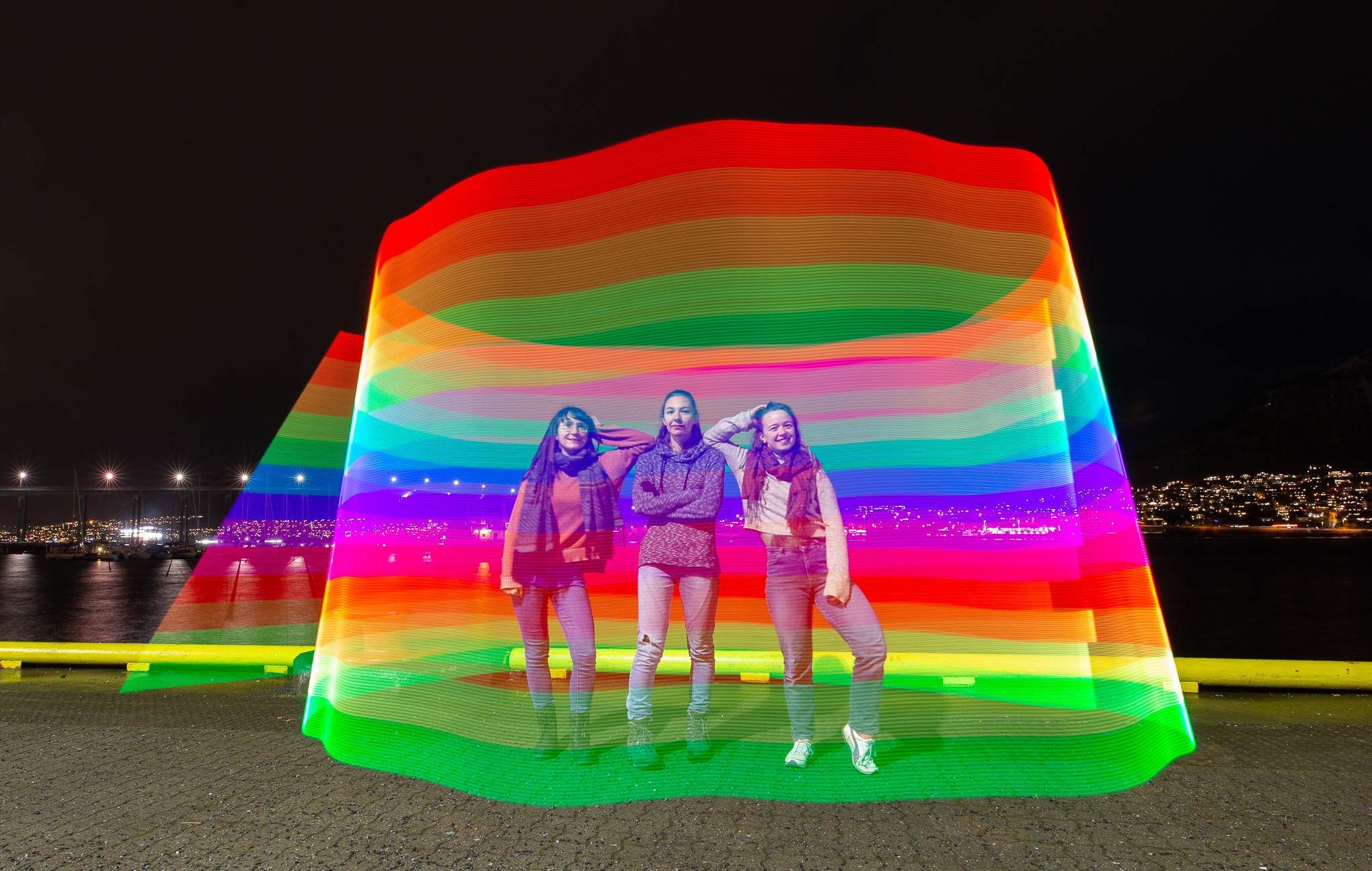 The goal of Arctic Pride was to organise an annual Pride festival in Tromsø, whose purpose is to create a safe and inclusive space for all people that deviate from social norms of gender and sexuality. Through the festival, the Municipality of Tromso also aims to establish dialogue, spread awareness and educate the public, in hope of promoting a society where everyone can freely express their gender identity, love and sexuality without fear of being discriminated, excluded or harassed. Arctic Pride works to promote diversity in an arctic context with focus on the challenges of both indigenous people and others living in the arctic region. Arctic Pride is held annually in November.

This year Tvibit as cultural and creative hub held a set of workshops and collaborations with Arctic Pride https://fb.watch/9JXwz04L38/ and among this a photo art event - painting doomy polar night in the colours of rainbow. Love is love, but why, how and what is next if we talk of a city over the polar circle? Answers can be found in the interview with William Copeland (workshop leader) and Alessandro Belleli (Tvibit project leader Fotomandag).

How came the idea to make a special photo workshop during Arctic Pride Tromso?
Alessandro: The idea was developed from a night photography workshop we made last year for the Black Out concept, where we painted the city with the pixel stick during the dark month of November in the arctic. At that time we thought about making a photo workshop with rainbow across Tromso and its symbols, but also with a focus on portraits of LGBTQ+ community or everyone that feels connected to their causes. Thanks to the night photography skills of members and active followers of Arctic Pride, we achieved the results you can see.

Art is always the strong argument to fight for rights. What was the exact message Tvibit and you, William as a workshop leader, wanted to contribute with rainbow drawing over the pinch black background of the Tromso?
William: I don't think I can speak for Tvibit, or Tromso commune, but personally the significance of the evening developed as we progressed with the photography. Many factors can be drawn from the images. For example, the rainbow with reflection in a puddle. Above the water you see the defined colours of the original pride flag. But in the water below, the rainbow mix and blend into a crystal like matrix. This is a great analogy for the LBGTQ+ community, we aren't defined by the stereotypes at the surface, down below we are a rich community spanning all variations and sharing familiarities despite our society given 'labels'.
I think it is very hard to target victims of discrimination with works like this. Having suffered myself in my home country, we have to be very aware that we are lucky to live in a country where the chances of discrimination are far lower than most other countries around the world. For many suffering, seeing photos like this can bring hope, but it can also trigger feelings of hopelessness. "Look at how happy and proud they are, and how sad and difficult my life is". It can be taken as 'showing off' too, it's a really complex issue. Victims of discrimination can only do so much to change the system. In order for change, there needs to be a synchronous and determined effort by humanity as a whole. Although that’s easier said than done.
Photographic messages, such as the one we carried out at the workshop, are a start. The best part of the pixel stick for light painting is that it is discrete. You can paint your message in light, without anyone else knowing what you are doing. Until the photo is posted online, and the message is bright and clear. 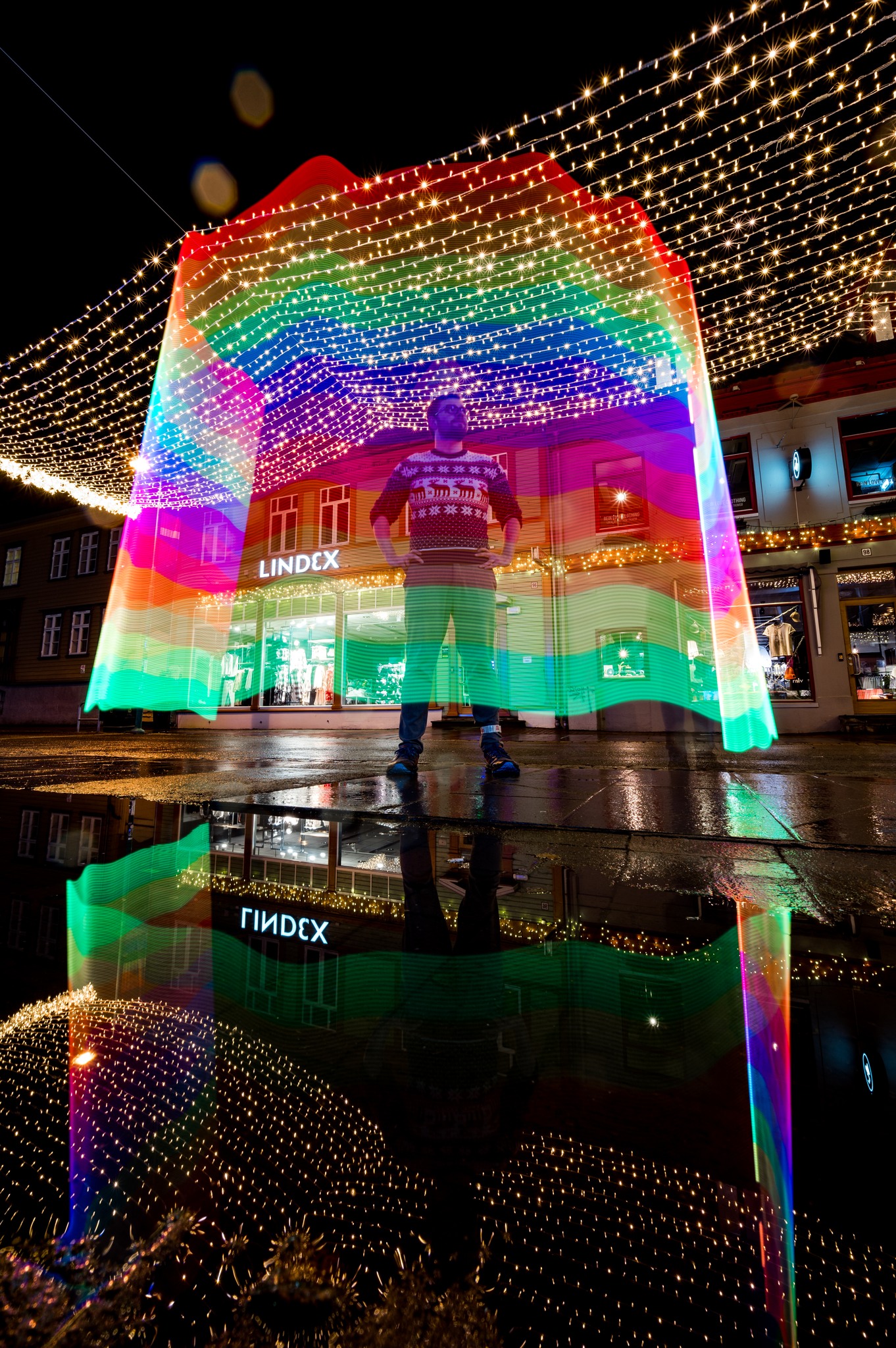 Why was art photography chosen as a tool? How was the technical producing, considering polar night darkness and "chilling" weather? Was it mostly post production or a true "in field" improvisation?
William: Art photography was chosen mainly due to the challenging conditions of polar night in the Arctic. Rain and ice was an issue, but as you see in the photos, it was the difficult weather conditions that led to some of the best reflection shots.
Much of the inspiration came to us 'in the field'. If this were to be done again, it would be great to mark specific locations for shooting and train with the pixel stick for an hour or two to get things just right.

"Painting" dark doomy days into the rainbow colors, had definitely a positive emotional impact for participants of the workshop. Will ideas find a future continuation as an art therapy? Or becoming more global, spread over other Arctic places?
William & Alessandro: We think it would be a great idea to make this an Arctic wide project. Especially during the polar night when so many people get in a low mood. Photo Monday and Tvibit are very open for such collaborations, great idea! It would be fantastic to make some Arctic Pride pixel stick flash mob in the “arctics” :)

Do you feel you reach the audience with the message? Or is a small step to the strategy aim?
William: To be honest, there were few people who were actually interested in what we were doing in the streets. At the end of the workshop a group of dog walkers, hangout people came next to us and took over our location where we were working. But in a way that's the beauty of this method for activism in countries where public displays result in arrest or worse.

Tromso Pride festival is a big event by itself, did the workshop get any synergy effect? Do you plan to collaborate directly with the Pride festival team in the future with other art projects?
Alessandro: The inherent meaning of pride and its values are very central for Tvibit, I would say they are part of our DNA as a cultural hub: we strive to create an inclusive and safe place where creativity can emerge. In the workshop the visual aspect of storytelling of Arctic Pride became quite powerful and carried a lot of positiveness that also merged with the idea of creativity in the polar nights. For the next year, we want to actively involve more photographers and get a chance to colour the rainbow of the city, letting the participants of pride that are interested, get their night light portraits.
William: We are absolutely looking forward to more collaborations with Arctic Pride, the message has been shared in the city, the pictures and the evenings have been a success.

Maybe more Arctic cities need a rainbow "corner" to rehab during polar nights. Workshop is definitely an inspiration for that. What do you think?
William: I think that any way to lighten the mood of people living through the Arctic winter is a plus in my book. Not just for the LGBTQ+ community, but for everyone. It would be so fun to create 'booths' around town with colours of the rainbow projected through sun lamps, where people could go just for 10 minutes a day to wake up. Even the most active of people experience some kind of energy slump in the dark months, light booth therapy could really boost the mood of a city.

APECS Art message: Thank you so much, William and Alessandro. Thank you so much for enthusiasm in collaboration, rights contribution for Pride related people and painting Arctic night in the rainbow colors! Looking forward for Tvibit news!