The APECS Art project group organised a “Science&Art” workshop led by Dr. Oliver Vanderpoorten. Oliver Vanderpoorten is a Postdoctoral fellow at UiT The Arctic University of Norway in the Nanoscopy group within the Physics department. His nanotechnology research often produces creative and aesthetic microscopy footage which he uses for exhibitions, outreach and science communication. Formerly, he was part of the Centre for Misfolding Disease at the University of Cambridge where he conducted research on nanolithography and nanoscopy methods. During his time at UiT he was mentor of the “Arctic OPTICA” chapter - a student organisation focused on optics. This gave him inspiration to form an outstanding, prize-winning collection of microscopic photography and supported him as a performing artist who uses light and optical phenomena as a media and art tool to communicate science to the general public at local events.

During the webinar we discussed how scientific research materials can reflect the dark polar night period, as well as how Arctic nature inspired Oliver to capture Norway-like landscapes and to add a blue/icy/wave character to some of his materials. For example, this frame titled “Nano-Hokusai” has recently won the MNE Nano/Micrograph contest award 2021 (3rd prize) at a nanotechnology conference in Italy during Oliver's time at UiT. The image itself can be confused with an abstract oil painting, but was captured with a conventional mobile phone through eyepieces of an Olympus stereoscope. During the development of photoresist (a common process in the electronics industry) the remaining material on a wafer shaped this aesthetic wave. The blue colour is real and arises by coincidence from the thin film thickness of 100 nm. This so-called “structural colour” can be found in butterfly wings, beetles and other organisms and gives them their vibrant colours. 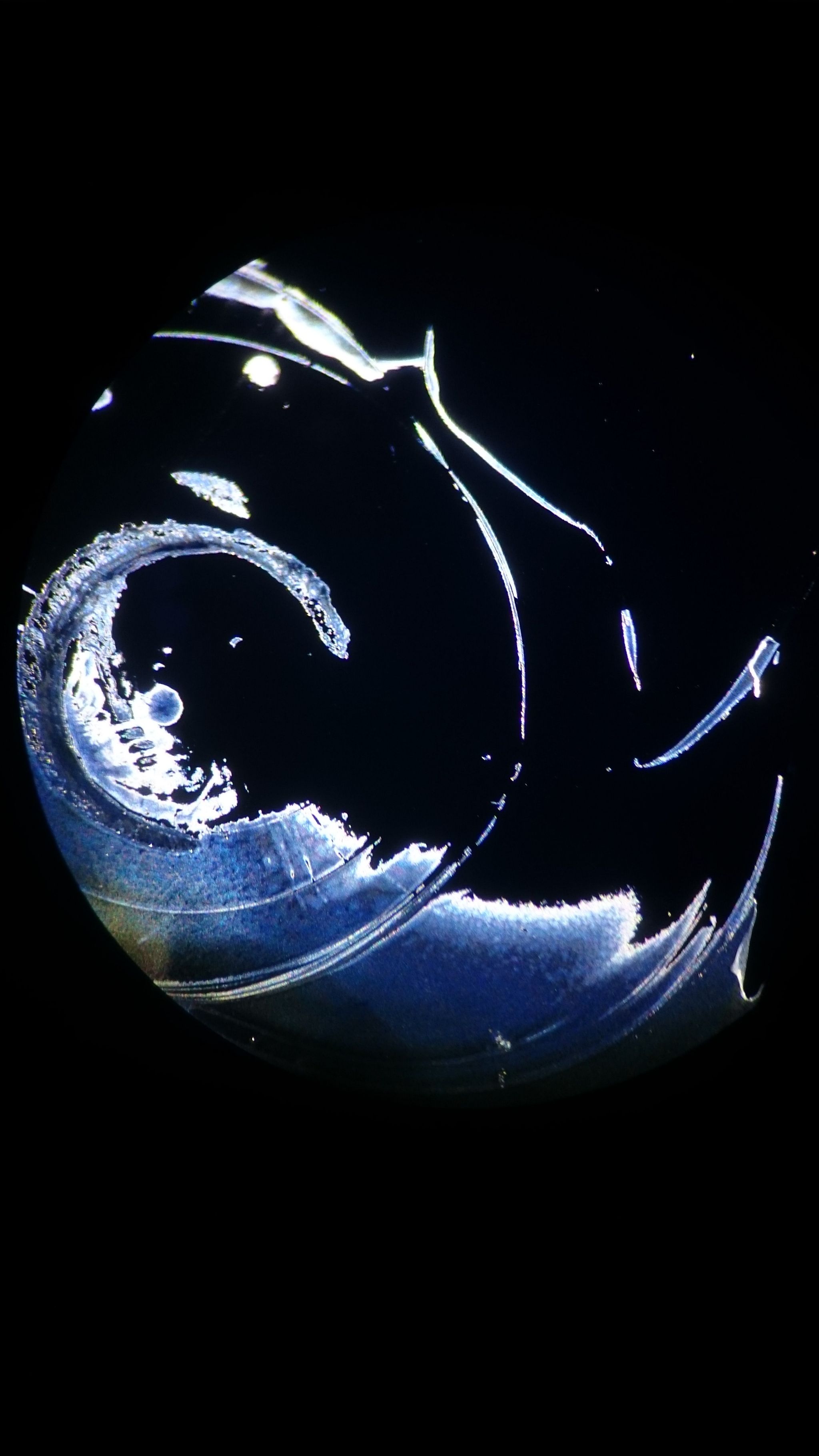 Nature is the genuine artist from nano to macro scales. Nature inspires human beings over centuries and lets us discover more and more miracles around the universe. Modern scientific instruments are tools to give us incredible opportunities to find more connections between nature and human-made pieces, such as shapes, figures, and colours.

Another example of Oliver’s research during lithography experiments - where he crafted microscopic structures onto a surface - can be seen in his micrograph “Interference”. The resemblance to the carved “Nazca lines” that can be found in Peru is unbelievable, considering the orders of magnitude of scale difference and the difference in time of origin. 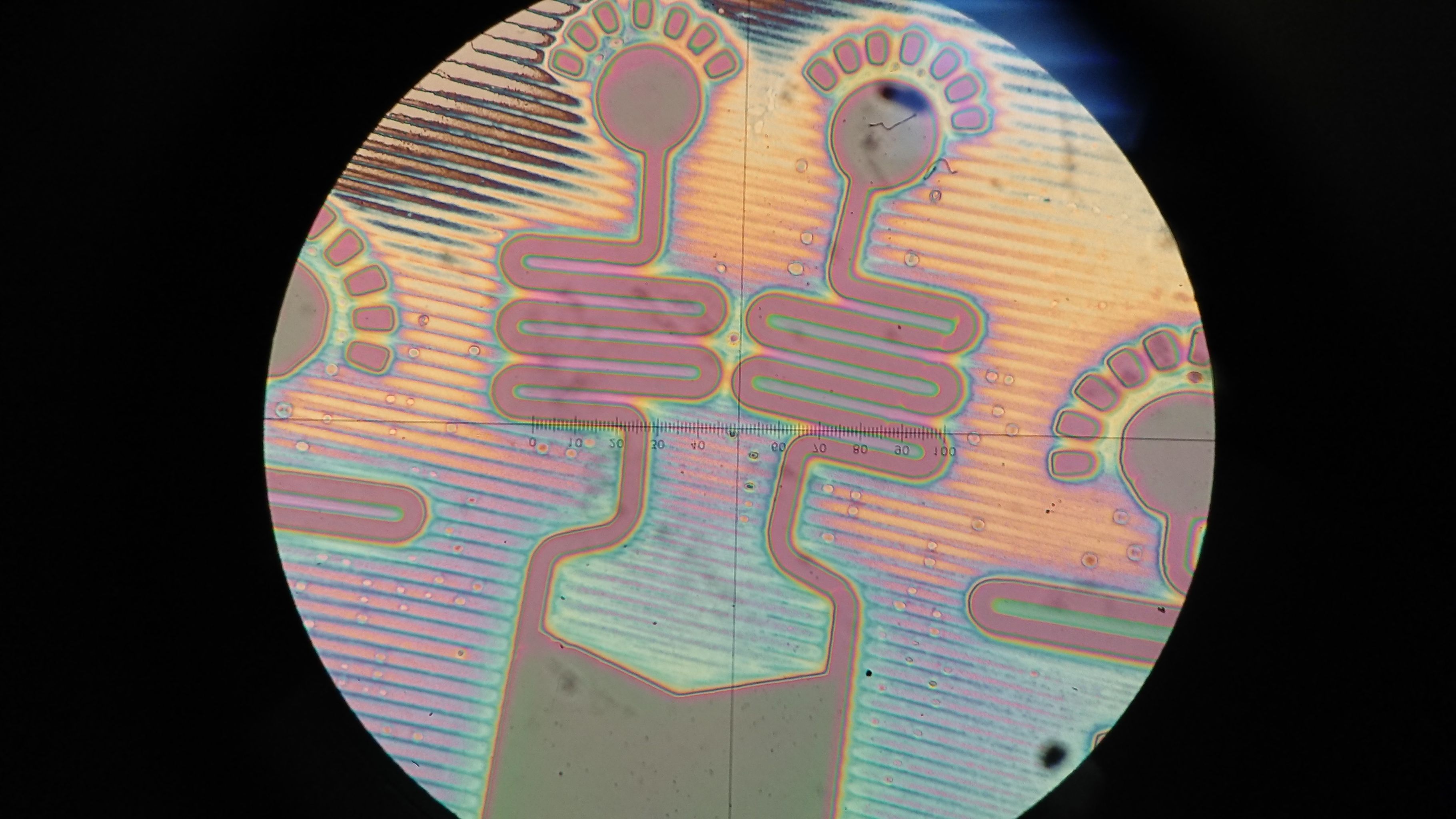 Oliver mentioned that dark winters in the Arctic were a great opportunity for him to develop himself as an artist. His scientific experiments in laboratories of University of Tromsø, his work at University of Cambridge related to Alzheimer’s and Parkinson’s disease and his involvement with the local creativity centre TVIBIT, established a broad portfolio of light and laser art installations, permanent exhibitions but also prize winning photographs. Oliver’s specific ability to capture colours, shapes and patterns in an artistic way is an important science input for society. The combination of science and creativity is an outstanding gift and definitely a catalysing power of progress. It is impressive that the combination of polar nights and nanotechnology in the Arctic yielded such interesting material for reflection. Thanks to Oliver for sharing his work.