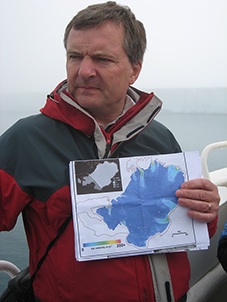 The International Arctic Science Committee (IASC) is proud to announce that the IASC Medal 2014 is awarded to Prof. Julian Dowdeswell Director of the Scott Polar Research Institute.

The IASC Medal Committee reviewed the nominations received and unanimously decided to honor Prof. Dowdeswell as a World leader in the field of Arctic glaciology, recognizing his outstanding and unique contributions to the understanding of glacier dynamics and ocean - ice sheet interactions. The committee also highlighted Prof. Dowdeswell´s outreach and communication activities which have been instrumental for public understanding of Arctic change.

The Medal will be awarded by the President of IASC during the Arctic Science Summit Week 2014 in Helsinki (Finland). The award ceremony will be on the ASSW 2014 Common Day on April 8 and include a short introduction by the IASC President and a 30 minutes lecture by the awardee. Congratulations!