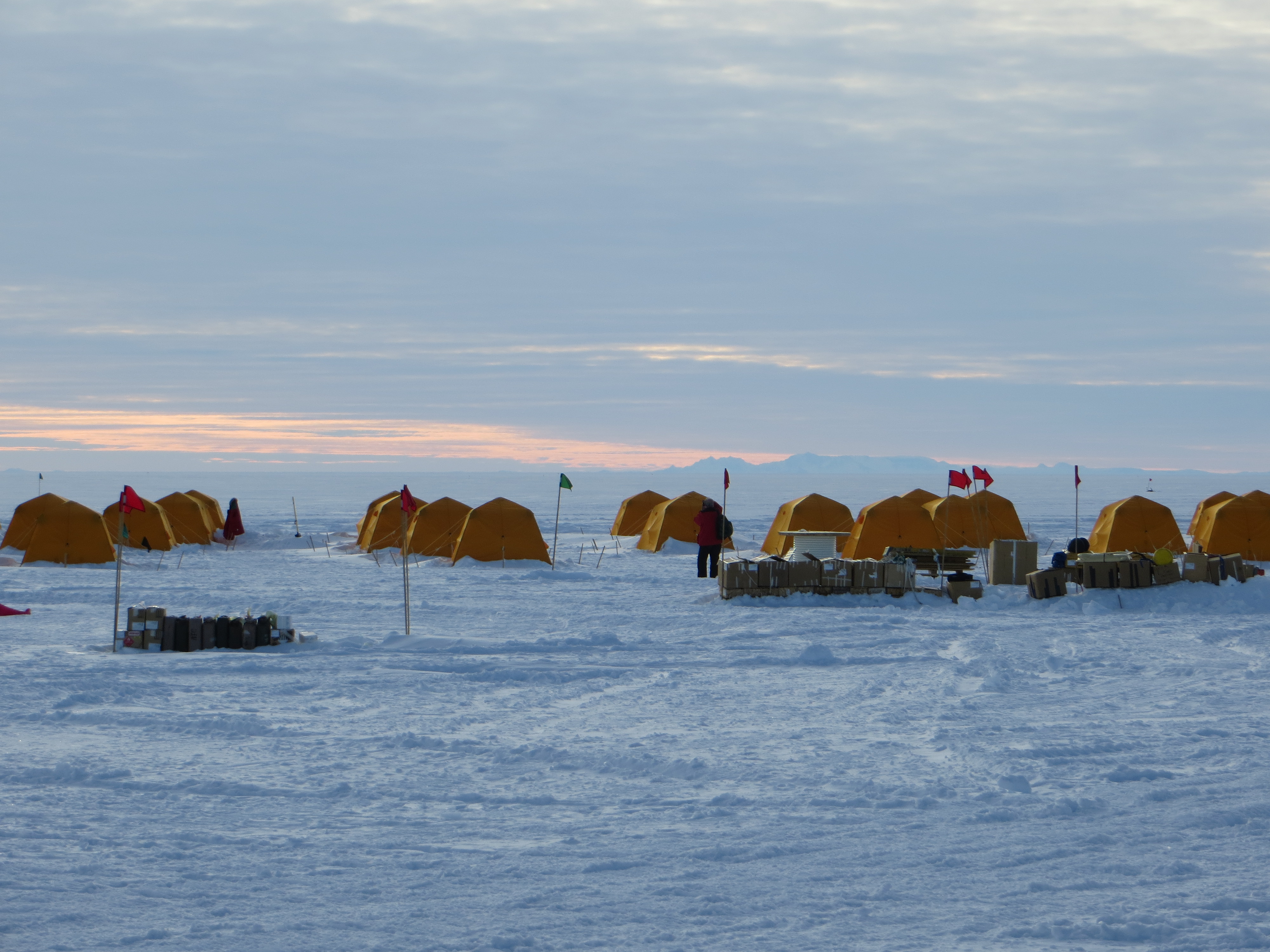 In addition to highlighting outreach efforts by polar researchers, this blog is also a place to highlight polar research projects by APECS members; written in a way that is compelling and accessible for a broad audience. Below is our first entry of this type, written by Trista Vick-Majors of Montana State University.

"Water, water everywhere. Nor any drop to drink." – The Rime of the Ancient Mariner

This classical description of the ocean could also be applied to Antarctica. If you were standing on the vast white Antarctic ice sheet, you would be surrounded by water. In fact, frozen water would likely be all that you could see, unless you were lucky enough to glimpse the tips of the Transantarctic Mountains, which divide Antarctica into East and West. Seventy percent of Earth's fresh water is stored, frozen, in Antarctica's ice sheets. What you could not see, however, would be the estimated 100 cubic kilometers (tens of trillions of gallons) of liquid water that are locked beneath Antarctica's ice, between it and the land of the Antarctic continent. The discovery of this water is relatively new. The first tantalizing verifiable hint of its existence, its scale and its potential role as a habitat, came with the final confirmation of the existence of Subglacial Lake Vostok in 1993. Vostok is the 16th largest lake on earth by area, and up to 1000 meters deep. During the following 20 years, nearly 400 other subglacial lakes were discovered under the Antarctic ice sheet.

The idea that liquid water existed beneath the ice was a major expansion in our understanding of the scale of Antarctic habitats. Before the discovery of the lakes, the interior of the continent was thought to be mostly inhospitable to life, save a few intrepid microbes making a living in the snow, or perhaps inside of the rocks where mountain ranges peeked out above the top of the ice sheet. Most of the action was in the Southern Ocean, which surrounds the continent, and in the lakes and streams of the handful of ice-free oases that dot its coast. Looking for life in a lake under the ice sheet (which can be up to ~4000 meters thick) was a step beyond looking for it in ice-covered lakes of the oases, where at only a few meters thick, the ice was thin enough for sunlight to penetrate to fuel the lakes' ecosystems.

As a student working on my M.Sc., I traveled to one of those ice-free oases, the McMurdo Dry Valleys, three times to study how heterotrophic bacteria, who depend on organic carbon produced by other organisms as food, responded to the setting of the sun. Sunset happens only once a year in the Antarctic, as the sun falls below the horizon in the fall, and rises again in the spring. The winter is total darkness. Without sunlight, phytoplankton (the plants of the McMurdo Dry Valley lakes) can't photosynthesize. I found that without them, the heterotrophs that depend on the phytoplankton as primary producers of carbon (food) essentially go on a winter diet. They shift their metabolisms from the active growth of summer, to maintenance mode until the sun rises. I wondered if there were heterotrophs in subglacial lakes that, in permanent darkness, lived in an almost permanent maintenance state.

In 2012, I got my chance to test that hypothesis. Now a Ph.D student, I am writing my dissertation on Subglacial Lake Whilllans (SLW). SLW is a small subglacial lake in West Antarctica, near the coast. It lies under about 800 meters of ice, is about two meters deep, and covers about 60 square kilometers. It is also part of a continuum of what are known as "active" subglacial lakes. Approximately once per decade, SLW drains downstream into the Southern Ocean. Neighboring lakes upstream drain into SLW, refilling it, and the cycle continues. Knowing that these systems impact the ocean, it is important to understand what exactly spills out of them when these lakes drain – nutrients? Microbes?

Before 2012, no one had ever retrieved a water sample from a subglacial lake. Doing so is not simple; it requires an array of techniques aimed at protecting these pristine environments from contamination. The team that I am part of enlisted the help of a hot water drilling team, who used a massive hot water drill to melt a hole through the 800 meters of ice above SLW. The drill used pressurized hot water instead of a drill bit and was equipped with filtration systems to remove microorganisms and particles from the drill water and with UV lights to damage or kill any that remained. It worked – we were able to retrieve clean samples from the lake! We camped out on the West Antarctic Ice Sheet and had 96 hours to take samples from the lake and run experiments to look for and learn about the microbial life in SLW. Getting there wasn't easy, but more about that in my podcast. 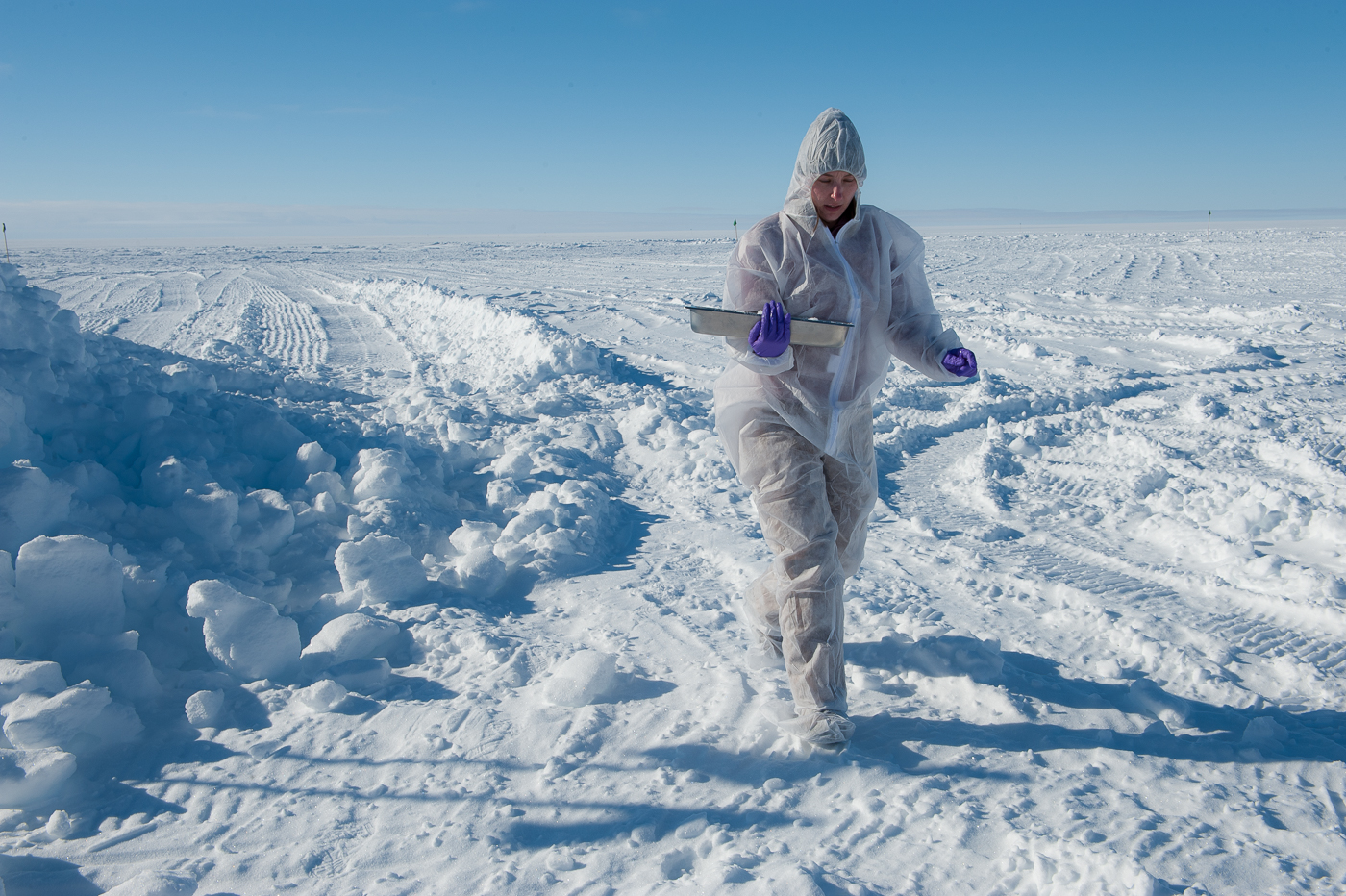 As a microbiologist and an ecologist, I wanted to know not only how the microorganisms that we found in SLW survived there, but also what their survival meant for the ecosystem. To answer those questions, I incubated samples of lake water with radioactively-labeled food sources (nucleotides and amino acids). By comparing the rates at which the microorganisms incorporated nucleotides (into DNA) and amino acids (into proteins), I could start to understand how they survived: were they thriving, or just maintaining like the Dry Valley lake heterotrophs during the winter? If they were thriving, they should be making about as much DNA as protein, because DNA production in a microorganism usually happens when a cell is going to divide. If lots of cells are dividing, then the population is growing. But, if the microorganisms are just in maintenance mode, they should be making more protein than DNA – not focused on growing their population, but rather just making enough cellular machinery to get by during tough times.

It turned out that the microorganisms in SLW incorporated about three times as much of the radioactively labeled substrate into protein as into DNA, which implies that they were actually doing at least as well as the microorganisms in the Dry Valley lakes and as those in the Southern Ocean, in spite of the fact that they are growing very slowly. Beneath 800 meters of ice, at half a degree below zero Celsius, not only was there life in SLW, but it was growing, not just surviving. 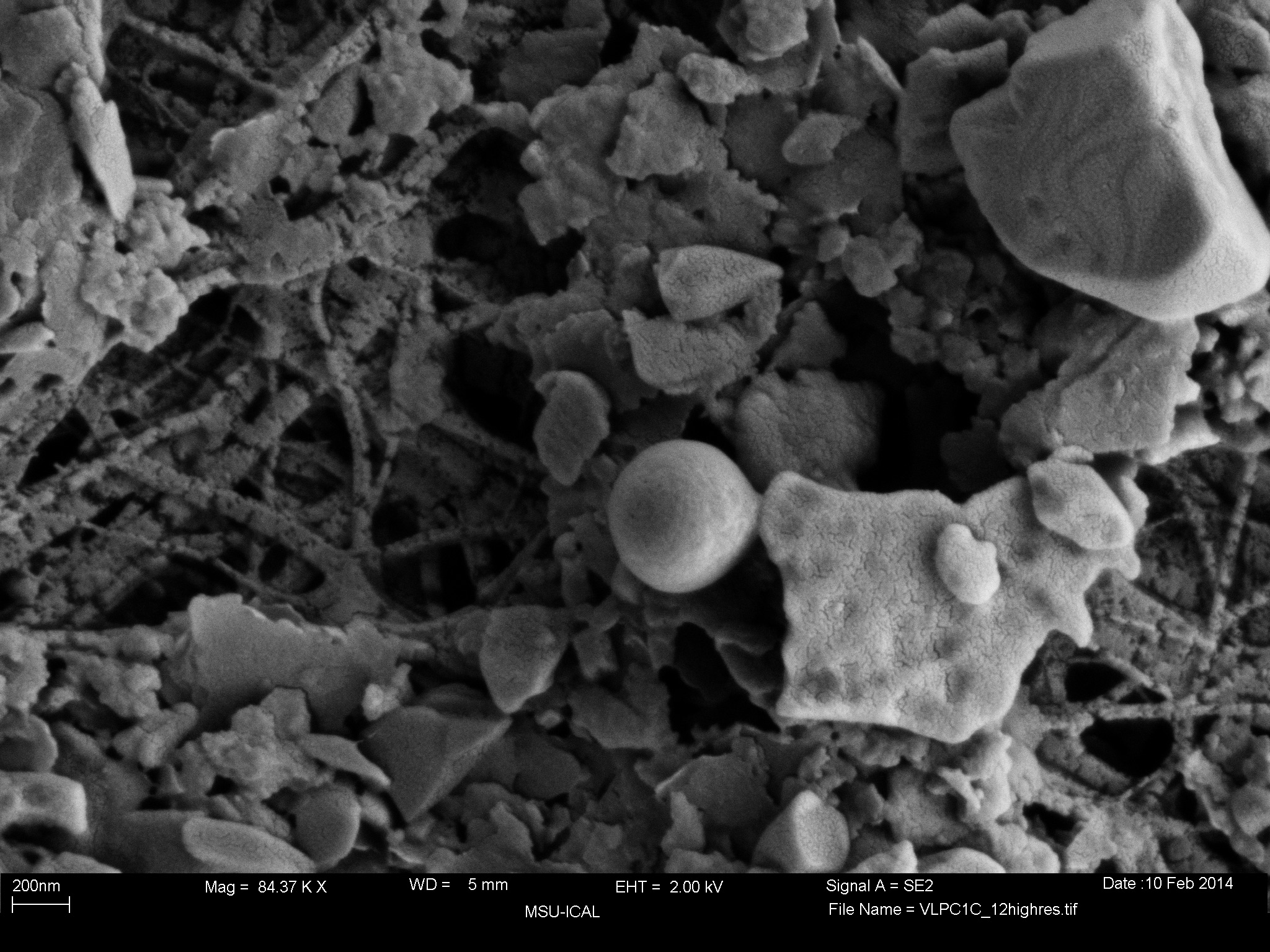 A scanning electron microscope of a microbial scale from Subglacial Lake Whillans (round, center) next to a sediment particle (Image by Trista Vick-Majors at the Montana State University ICAL facility).

Maybe the next stop will be to travel not to the largest mass of ice on Earth, but to a large mass of ice on one of Jupiter's moons to find the tiniest creatures beneath its frozen seas.

Trista Vick-Majors is a Ph.D candidate in Microbial Ecology at Montana State University. She has spent five field seasons in the Antarctic, studying microbes in lakes and the ocean beneath ice shelves and trying to understand their survival strategies and contributions to the carbon and nitrogen cycles.