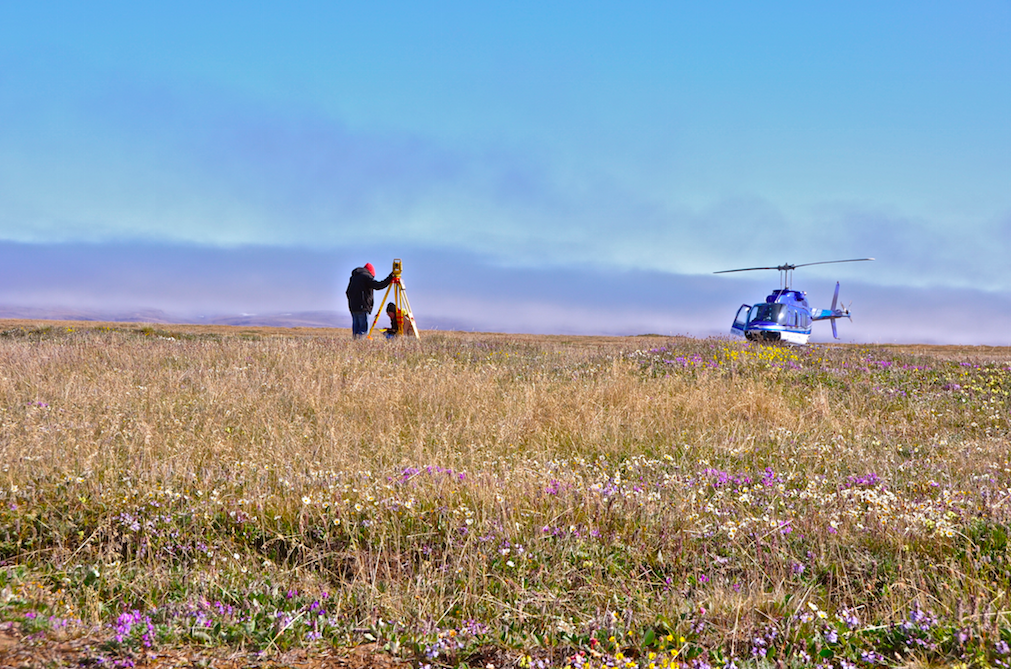 Hello from London Ontario, Canada! I am an anthropology PhD student from the University of Western Ontario. In celebration of International Polar Week I am excited to write this blog post that discusses community-based archaeology in the Canadian Arctic and the consultation and outreach initiatives being undertaken as part of the Ikaahuk Archaeology Project.

It is no secret that the discipline of archaeology is rooted in European colonialism. Early archaeological research in the Canadian Arctic coincided with colonial exploration and expansion and had many negative effects on Inuit communities. Traditionally, archaeologists working in the North discouraged Inuit participation in archaeology and made little use of Inuit interpretations. They neglected to inform local communities about why they were conducting research as well as their results. Material culture and human remains were brought to the south without knowledge or permission from community members. These practices reinforced colonial power relations and alienated the Inuit from their material culture heritage. Community-based archaeology arose in the North as a response to Inuit concerns about archaeological research.

Community-based archaeology institutes more inclusive approaches, with community engagement and outreach at the forefront. There are many diverse Inuit communities in the Canadian Arctic and therefore no standard guidelines for northern community-based archaeology projects. Projects are tailored to meet the needs and research capacity of the communities. However, they share key elements including consultation with community members during the research planning and execution, the incorporation of Inuit knowledge, and the dissemination of research results to Inuit audiences in ways that are meaningful to them. In some cases the projects are initiated and fully lead by the community. In other cases the projects are initiated and run by archaeologists with a strong focus on community engagement and participation and outreach.

The Ikaahuk Archaeology Project is a 5-year study led by Dr. Lisa Hodgetts that aims to combine archaeology with Inuvialuit knowledge to better understand the human history of Banks Island, NWT. The project is currently in its fourth year and involves working with people in Sachs Harbour to hear and respond to their concerns, incorporate their perspectives and develop outcomes that are meaningful to them. Sachs Harbour (pop. ~80) is the most northerly town in the Northwest Territories and the only town on Banks Island, or "Ikaahuk" the Kangiryuarmiutun (an Inuvialuktun dialect) word for it. My PhD research explores how perceptions of the past and archaeological research vary within the community, to determine how archaeology can best complement Inuvialuit understandings of the past. I conducted a preliminary field season in the summer of 2013, a three-month field season last summer, and I am headed back up North for a one-month field season in less than two months! My fieldwork involves interviewing community members about their family histories and the history of Banks Island and how historical knowledge is passed down within the community. I also ask them about their perceptions of archaeology, if they think archaeological research should be conducted on the island, and if so how they think the community should be involved in research and what future research should focus on. I also participate in activities that community members use to learn about or engage with the past and their heritage, such as sewing, fishing, and community events.

The Ikaahuk Archaeology Project has been working hard to better engage the Sachs Harbour community based on community suggestions. Upon arrival in town for the field season and prior to leaving we hold community feasts where we explain our research and findings and ask the community for their input. We have an active Facebook page to disseminate research results and are currently working on a permanent website. Last summer the project hired two local youth to participate in the excavation of a Thule-Inuit winter house. In response to community concerns over previous archaeological projects that removed artifacts without community knowledge, the Ikaahuk Archaeology Project is working on ways to reconnect community members with artifacts. As suggested by community members, replicas of some of the artifacts uncovered last summer are being made by Tim Rast, and will be donated to the community. We are also currently gearing up for a trip this spring to the Prince of Wales Northern Heritage Centre in Yellowknife, NWT with youth and Elders from Sachs Harbour to make digital 3D replicas of some of the artifacts from Banks Island that are stored there, as a way to virtually bring them home to the community.

A 3D model of Kamik artifact from Banks Island, which is housed in the Prince of Wales Northern Heritage Centre made by Colleen Haukaas.

Despite the progress being made in our outreach initiatives, we still have our share of challenges. Every researcher working in the North is more than aware of the limitations of time and resources. It does not help that the university system does not weigh outreach initiatives with the same importance as more "academic" ventures, so unfortunately they can often get put aside when other work needs to get done. Additionally, consultation has only been conducted with people willing to participate in our research. The Sachs Harbour community is small but diverse. I suspect that there are people in town who have many reservations about our project, to the point where they do not want to participate or engage. Unfortunately, their important views remain unheard and undocumented. Conversely, there may be people who want to be more involved in the project but do not have the time.

Unfortunately, contemporary archaeologists and Inuit communities are burdened with the legacy of previous archaeology projects that operated within a broader context of colonialism. By instituting a community-based approach through outreach and consultation initiatives the Ikaahuk Archaeology Project is working to better our relationship with the Sachs Harbour community to help ensure that our research is both of interest to the people whom it can impact the most and can also serve to benefit them.

Wishing everyone a happy International Polar Week! And remember to check out the Ikaahuk Archaeology Project on Facebook!