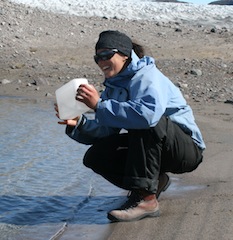 In 2011, at the start of her first postdoctoral position, Ruth Vingerhagen (née Hindshaw), joined the ranks of APECS. With a Master’s degree in chemistry from Edinburgh University, and a PhD in geochemistry from ETH Zürich, Ruth’s research largely focuses on using metal isotopes to understand the temporal and spatial variations of river water chemistry, particularly rivers draining glaciated and permafrost-dominated catchments. All while completing three post-doctoral positions at NGU in Norway, University of St. Andrews, and the University of Cambridge, she also has two children.

As a representative on APECS Council, before the onset of our project group system, Ruth served as Co-Chair or the Research and Activities Committee from 2013-2014. Following her work on the RAC, she served two terms on the ExCom, including one as president from 2015-2016. From 2016-2018, she played an advisory role as the Ex-Officio. Currently, she is serving on the APECS Norway National Committee.

Though she has worn many hats in APECS, Ruth cites being president as her favorite role,

“I enjoy planning, organising and coordinating things! Organising in-person events such as a workshop or poster awards is always very rewarding. One of my favourite activities was at the start of my involvement with APECS when I helped review proposals for INTERACT. Through reading the proposals it almost felt like I'd been to some of the field stations!”

Currently, she and many others on the scientific organizing committee are excited to see POLAR2018 come to life. When asked about other projects of interest, Ruth described working on a paper about APECS,

“I'm also looking forward to get the reviews back for a paper I was involved in highlighting the achievements of APECS in soft-skill development and education, outreach and communication activities. In general, I think it's fantastic that APECS is widely recognised and that because of our work more and more organisations are contacting us to provide ECR opportunities and involve us in their projects.”

Though Ruth has definitely put in uncountable hours in dedication to serving APECS, the benefits have not been one-sided. Being involved in a diverse community has widened her perspective regarding career options outside of academia as well as keeping her up to date with polar research outside of her own field. This broadened perspective allows for a wider interpretation of her own research as well as consideration for the human element, all while adding a sense of motivation. Participation in APECS has provided a broad sense of learning and opportunity, specifically, Ruth describes

“I have also learnt about the 'behind the scenes' aspects of both international volunteer-led organisations and research itself, for example how funding calls are developed. More specifically, being involved with APECS has enabled me to attend conferences and meetings that I would never have been able to attend otherwise. I can safely say that my involvement with APECS has been extremely rewarding.”