This year I arrived in Antarctica in January 2015. The study area of mys research is focused on the ice-free environments of the Byers Peninsula (Livingston Island) and Fildes Peninsula (King George Island). Both areas are located in the South Shetland Islands, an archipelago located in the northwest fringe of the Antarctic Peninsula. 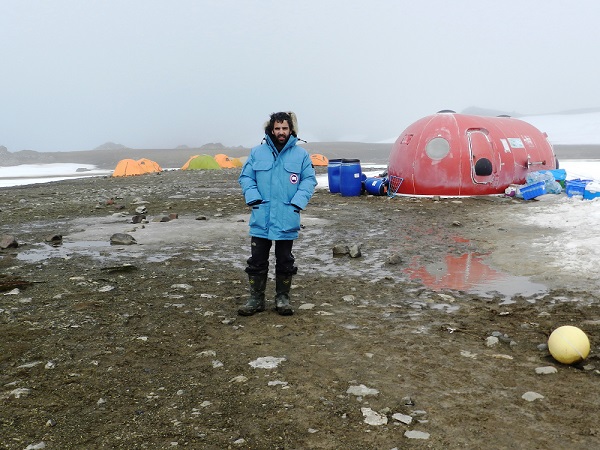 Byers Peninsula constitutes the largest ice-free area in the South Shetland Islands. It is a protected area in Livingston Island, with the largest biodiversity in Antarctica. Research activities are regulated by the Management Plan for Antarctic Specially Protected Area No. 126 (Byers Peninsula, Livingston). Byers Peninsula has a relatively flat relief with more than 110 lakes/ponds, some of which have been studied within the HOLOANTAR project (http://holoantar.weebly.com/). During the first part of the campaign in Byers we stayed in a Chilean camp. The camp was close to the Spanish igloos, which facilitated field work activities and our daily stay in the area. Fildes Peninsula is the second largest ice-free environment in this archipelago. Several bases and facilities are distributed across this area. Between the February 2nd-11th we stayed at the Chinese base, Great Wall. From this comfortable station, we went across all the Fildes Peninsula conducting our field work activities.

The scientific purpose of the expedition is to analyse the relationship between permafrost, geomorphology and the process of deglaciation in Byers and Fildes peninsulas. The recent decades have seen a strong warming in the Antarctic Peninsula region (+2.5ºC in almost 60 years), with very significant impacts on maritime and terrestrial ecosystems. The reconstruction of the process of deglaciation in these two ice-free areas will allow understanding if the rapid glacial recession has been also recorded in the past. The chronology of the retreat of the ice caps during the Holocene is also crucial to understand the distribution of permafrost and associated geomorphological processes occurring today in these areas.

In the Byers Peninsula in January 2014 we installed equipment for monitoring air, soil and the interface air-ground temperatures as well as snow thickness in order to assess the role of topography in permafrost distribution and active layer dynamics. The altitudinal limit of permafrost in the Byers Peninsula has been also examined through geophysical surveying. In both peninsulas we have collected soil samples to characterize the physical, geochemical and cryogenic processes affecting the active layer of the permafrost along transects from the glacier to the coast of the peninsulas. Besides, we have also collected tens of samples across the peninsulas from moraines, polished surfaces and erratic boulders for cosmogenic dating. These samples will provide the age of deglaciation in different sites of Byers and Fildes peninsulas, which will be very useful to better understand the rate of glacial retreat in these areas as well as the type and magnitude of processes affecting the ice-free terrestrial ecosystems in the Maritime Antarctic after their deglaciation (geomorphology, permafrost distribution, colonization of vegetal species).

The Canada Goose Expedition Parka has been very useful during the field work in this archipelago, where rain and snow, intense cold and extreme winds condition our daily research activities in the field.

Many thanks to APECS and Canada Goose for supporting my research!