The two groups held a joint session, which was attended by both group’s delegates. APECS was once again invited to participate and APECS member Nikolaus Gantner was able to attend the meeting as a representative. This is what he reported back from the meeting:

"Right off the bat, I can say that I was genuinely impressed by the high level of the meeting and its formal process. For example, heads of delegates refer to each other by the Country’s name, much like at a UN meeting. I myself was addressed as ‘APECS’.

Much of the first day of the AMAP meeting was spent agreeing on realistic deliverables derived from a series of policy recommendations made following the recently completed Persistent Organic Pollution (POPs) Assessment. This step is important, as it ensures knowledge generated during this recently completed assessment into actions that will make a difference for contamination with POPs in the Arctic regions. The POPs Assessment report triggered much debate. The very interesting prospect of the use of Unmanned Aircraft Systems (UAS) in the Arctic led to a lively discussion as well. Interesting from an APECS-perspective is the ‘Adaptation Actions for a Changing Arctic’ (AACA) project, which already provided some opportunities for direct involvement of APECS members. 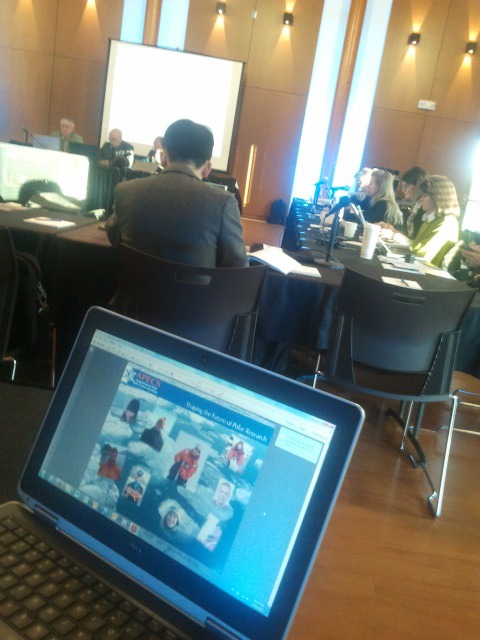 Over the second and third day, recent progress and future efforts on the AMAP secretariat were detailed. Details of and contributions to the upcoming Arctic Biodiversity Congress (Trondheim, December 2014) and Arctic Change 2014 Meeting (Ottawa, December 2014) were also discussed. APECS will be present at both meetings and will be organizing social event, sessions and career panels at them. Much of the efforts to determining follow-up from this AMAP meeting and timelines thereof were driven by the nearing Task Force meetings and the Arctic Council meeting in Iqaluit in April of 2015. Canada will then hand the chairmanship to the United States for 2015-2017.

Near the end of the meeting, I was able to give a brief presentation behalf of APECS membership (of ~4800) on APECS outreach activities and highlight recent publications by APECS Canada members. The AMAP Secretariat and meeting Chair commended APECS on its outreach efforts, a compliment that I am happy to pass on to you all! Moreover, there might be exciting opportunities for APECS members to get involved in AMAP, so stay tuned! Whitehorse was an excellent location for this meeting, and welcomed the international delegates who all seemed to be enjoying themselves!"