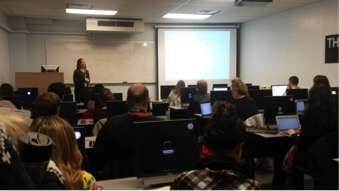 The Canadian Polar Data Catalogue recently hosted a data management workshop for early career researchers on October 27, 2015, as part of the International Polar Data Forum II held in Waterloo, Canada. The workshop was co-organized by APECS and the Canadian ArcticNet Students’ Association, with additional support from the University of Waterloo. Gabrielle Alix, the data manager for the Polar Data Catalogue, led participants through a 3-hour crash course in sound principals of organizing data, creating metadata, and ensuring long-term preservation through careful documentation. After explaining the principles, participants were able to practice their new skills in a computer lab using their own datasets (or, for those who didn’t have data, on pre-arranged datasets that the Polar Data Catalogue provided). Gabrielle had given a shorter version of the workshop at the APECS World Summit in Bulgaria earlier this year, at which APECS members provided very useful feedback that was implemented for the recent longer workshop. The Polar Data Catalogue will also be sharing their knowledge regarding sound data management at a similar workshop during Student Day at the ArcticNet Annual Meeting in Vancouver, Canada this December.

Many of the students and early career researchers who participated in the workshop also had the chance to network with each other and mentors from the Polar sciences and data management fields the night before at an early career social night. The social was a great kick-off to the week, sparking many interesting conversations and creating a comfortable working environment that lasted for the remainder of the Polar Data Forum II. The Polar Data Forum II itself brought together more than one hundred researchers, northerners, policy makers, and data managers from around the world to discuss strategies for developing effective interdisciplinary stewardship of and access to Arctic and Antarctic data. There was a terrific showcase of current data management and open-access initiatives for the polar sciences, including those being created by and for various Inuit organizations. Major issues of discussion included long-term preservation, the development of international standards for sharing data between systems, and finding long-term funding for open-access databases and data rescue projects.